Canary Island sandstorm: Flights cancelled because of sand from Sahara 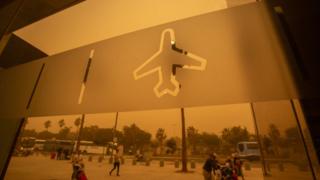 Getty Images
The sandstorm has turned the skies bright orange

A huge sandstorm has swept across the Canary Islands off the coast of Africa and turned the sky bright orange.

Strong winds brought the sand over from the Saharan desert and people have been told to stay indoors.

Lots of flights have been affected which meant tourists have struggled to get home, but most airports have now started operating again.

Why are showers so hard to forecast?

How has Storm Ciara affected you? 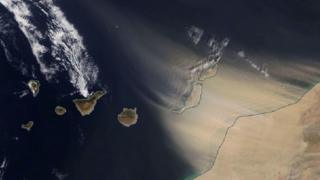 NASA
The sandstorm can be seen from space

The sandstorm is so big that it can be seen from space.

The regional government in the Canaries issued a state of alert over the weekend, and told people to close their windows and avoid travelling.

The national weather service said strong winds could hit the islands until later on Monday.

The Canary Islands are considered part of Spain and Spanish is the main language spoken there but they are actually located off the north west coast of Africa. 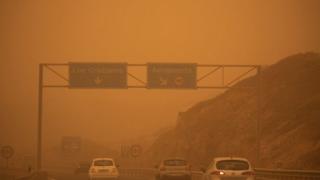 The Canary Islands are popular with tourists who are in search for some sun in winter.

They include places like Tenerife, Fuerteventura, Gran Canaria, Lanzarote and La Palma.

The company who run the airports there said all have them have now reopened, except the airport in Tenerife South.