Kitchens across the UK are set to get messy as we once again celebrate the tradition that is Pancake Day.

Yes, there could be batter on the ceiling, your pet cat, or maybe even your nan, as people spend the day flipping, tossing and most importantly attempting to catch the pancakes.

To celebrate, we're taking a look at some of our favourite pancake-related world records.

Reckon you could beat any of these? Head to the comments below to let us know if you think you could do batter!

Get your frying pans ready!

Why many of you may be giving up chocolate from today 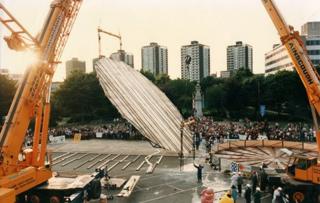 Guiness World Records
The largest ever pancake was made in the UK and had to be flipped using a crane!
The largest pancake ever

The largest pancake was created in Rochdale, Greater Manchester, in 1994, by the Co-Operative Union, Ltd.

It was 49 foot (ft) wide and one inch (in) thick. The pancake weighed three tonnes (that's the weight of an African elephant!).

It's no surprise then that the batter-made monster took more than just a frying pan to flip over! 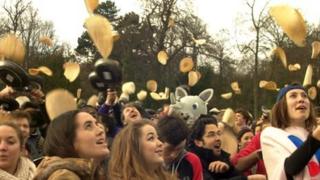 The most people to toss pancakes at the same time was set in 2012 in Sheffield.

A huge crowd of 890 people flipped them non-stop for 30 seconds to get the world record.

Flipping a pancake while running a marathon

Now this might not actually be as daft as it sounds. Think of all those extra carbs for energy while running!

Mike 'The Pancake Man' Cuzzacrea flipped one pancake continuously while taking part in the Casino Niagara International Marathon in 1999.

Unfortunately he wasn't allowed to eat it, but on the bright side, he did run it in an impressive time of just over three hours which secured the world record. 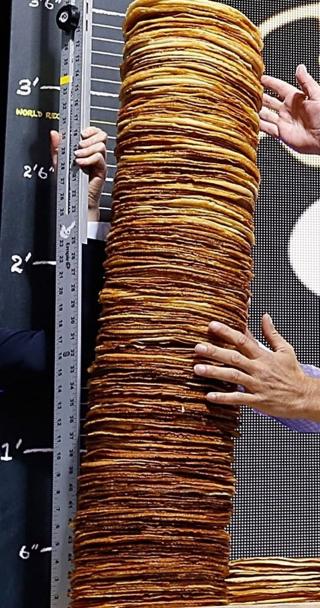 Getty Images
Lots of people have attempted to have the tallest stack of pancakes, but the world record was recorded in Nottingham in 2016
Tallest Stack

The tallest stack of pancakes ever recorded was 3 ft 4 in - that's the same as the average height of a child!

Over 200 pancakes were balanced on top of each other at a Center Parcs in Sherwood Forest, Nottingham in 2016.

The biggest flip measured at 31 ft 1 in - that's nearly five times the height of Peter Crouch.

The record was also set by Mike 'The Pancake Man' Cuzzacrea in 2010 in New York, USA.

Most tosses of a pancake in one minute

He holds the record for the most tosses of a pancake in one minute, notching up a so far unbeatable 140 flips in 60 seconds.

One thing is for sure these world records are flipping awesome!

Let us know how you get on with your pancake making in the comments below.

Pancake Day: How to make a perfect pancake

Pancake Day: Everything you need to know about Shrove Tuesday