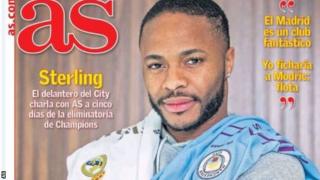 Raheem Sterling has been pictured with a Real Madrid shirt after being asked about his future with Manchester City.

"When you see the white shirt you know exactly what the club stands for, it's massive," said Sterling.

City play Real Madrid in the last 16 of the Champions League, with the first leg in Spain on Wednesday. The return game at the Etihad Stadium in Manchester is on 17 March.

However Manchester City, who are the current Premier League Champions, have been told they will not be allowed to play in European football for the next two seasons. The ban starts next year.

Braithwaite at Barcelona and other unusual transfers

Who are the five nominees for BBC Women's Footballer of the Year?

It is because they have been found to have broken rules relating to how much money they are allowed to spend.

That means that there is now more speculation over whether City's top players will leave. So will Raheem go?

He told Spanish media company AS: "Right now I'm at City and I'm really happy. But I say Real Madrid are a fantastic club."

Asked whether he would one day like to play for La Liga leaders Real, he said: "How do I answer that one? Is the camera live or is it just taking pictures?"

Manchester City manager Pep Guardiola said his players were "free to say what they think. We're not here to tell them what they have to say".