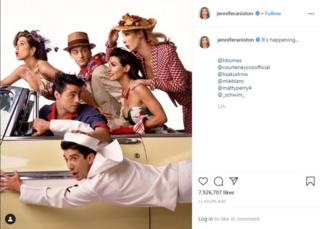 Fans of the TV show Friends have been waiting a LONG time for the cast to get back together...and now it's finally happening!

They'll be reuniting for a one-off special.

More than 15 years since the show ended, actors Jennifer Aniston, Courteney Cox, Lisa Kudrow, Matt LeBlanc, Matthew Perry and David Schwimmer announced on social media that they would be meeting up again.

However some fans might be disappointed because the cast won't be making a new episode, but an unscripted special.

The reunion, which has not yet been titled, will air on HBO Max - a streaming service which launches in May.

Want to be an animator? Take some tips from Missing Link's director

Why is it a big deal?

Friends first aired on television 25 years ago in September 1994 and it lasted for ten years. A massive 52.5 million viewers watched the final episode in 2004.

It focussed on six mates; Ross, Rachel, Phoebe, Monica, Chandler and Joey living in New York during the '90s and early noughties. Episodes were full of floppy haircuts, and bad fashion - Ross even had a pair of leather trousers...

Think you know all about Friends? Try our quiz. 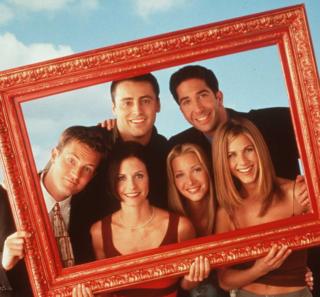 Getty Images
Why is Friends still so popular?

The show is on Netflix in the UK, which means people who weren't even born when Friends was on TV, can still watch it.

Friends was named the UK's favourite streaming show of 2018 and a recent report from Childwise Monitor shows it's very popular with children under the age of 16.

However there has been some criticism of the sitcom from people watching the show for the first time, who say that some of the jokes are outdated and that the main cast lacks any kind of diversity.

But with a reunion confirmed lots of fans are really excited.

Announcing the news on Instagram, along with her other cast members, Jennifer Aniston's post was liked over 7 million times.

Kevin Reilly, chief content officer for HBO Max, said: "Guess you could call this the one where they all got back together — we are reuniting with David, Jennifer, Courteney, Matt, Lisa, and Matthew for an HBO Max special."

Are you excited for the Friends reunion? Let us know in the comments.

Friends quiz: How much do you know about the show?

How do you make friends with someone new?