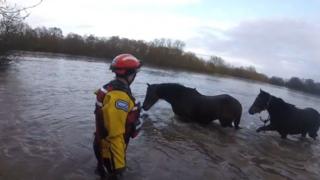 Flooding has caused big problems for lots of people across the UK, but it's also caused issues for many animals too.

Animal welfare charity, the RSPCA, has been working hard to help wildlife affected by the recent storms and floods.

Rescuers dealt with hundreds of emergency calls during Storm Dennis, responding to horses, sheep and other animals trapped or stranded in the extreme weather.

The animal welfare charity's specialist water rescue team and its frontline officers have been working hard to reach and rescue as many animals as possible.

Find out loads more about floods and extreme weather

How has Australia's wildlife been affected by the bushfires? 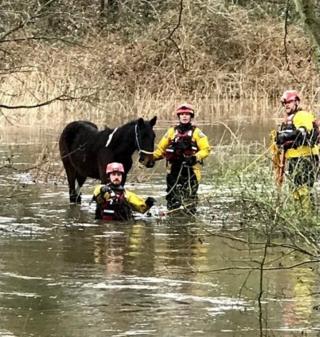 An RSPCA team were called to a flooded field in Surrey to rescue a pony struggling to stay on dry ground.

RSPCA animal welfare officer Carl Hone said: "When we arrived we waded across the water, which was extremely deep in places, and could see that she'd been there for some time as she'd eaten the bark off all of the trees in the vicinity.

"We managed to carry some hay over for her and she devoured it. She was clearly hungry."

Officers waded through the deep water and managed to guide the pony to safe ground. 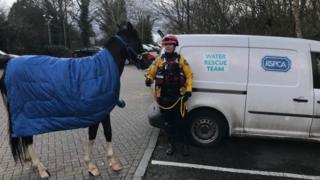 The pony is now safe and has been called Jemima Puddle Duck after the famous Beatrix Potter character.

Currently the owners of Jemima have not been located, but if no one comes forward she will be given a new home.

In Wales, which is one of the worst affected areas, the RSPCA water rescue team were called to a flock of 40 sheep in a flooded field.

Luckily, water levels has begun to drop, and rain had stopped so the farmer managed to rescue the animals himself using a tractor.

The charity has launched an emergency fundraising appeal to help with rescue efforts.

RSPCA inspector, Jason Finch, said: "We've been incredibly busy and our amazing staff have been working round-the-clock to help as many animals as possible."

How to protect wildlife in your area from the floods

●Check ponds are not freezing over

●Leave food and fresh water out for birds. You can buy suet and seed feeders to hang from branches and fences, or scatter grains, like oats and sunflower seeds in the garden.

●Keep bird baths free of ice, leave out bowls of clean water, and keep any feeders and water bowls clean. 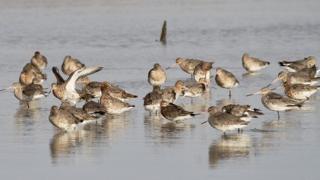 Hamish Murray
4,000 black-tailed godwits have been spotted near Dorset in the south-west of England
Godwits safe in a lagoon

Some animals have managed to adapt to the flooding though, with 4,000 rare birds spotted off the coast of Dorset in the south-west of England.

The black-tailed godwits found a lagoon that gives protection from the floods and also has plenty of food available to eat.

Black-tailed godwit numbers have declined over time, so wildlife experts say it's really positive to see so many of the birds together.

The RSPCA advice is to never put your own life in danger to attempt an animal rescue.

If you see an animal outside that looks like it's suffering or in danger, tell an adult. They can then take a note of the location, time and date, and call the RSPCA.

The animals rescued after getting stuck in the strangest places

Donald Trump 'will not pay' for Meghan and Harry in US