Storm Dennis: UK could see a month's worth of rain in 24 hours 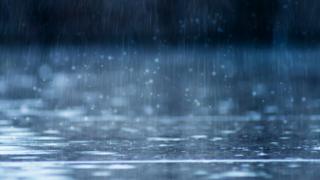 Parts of the UK are facing more heavy rain with nearly 120 flood warnings in place across the country.

In north Wales and north-west England a month's worth of rain is forecast for just 24 hours, falling on ground that is already saturated following Storm Dennis.

England has already had 41% more rain so far this month than it would normally see during the entire month of February, according to the Environment Agency (EA). 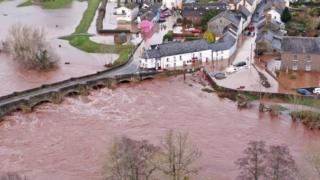 Persistent, heavy rainfall means rivers are less likely to be able to cope with further rain.

The EA said there is a "heightened flood risk" across the Midlands, with six severe warnings still in place around the Rivers Lugg, Severn and Wye.

Dave Throup, the EA's manager for Hereford and Worcestershire, said the Wye flooding was over half a metre higher than anything for 110 years.

He said on social media that "what I've seen over the last few days isn't normal. It isn't even the new normal. It's going to get worse. We need to adapt and respond. And fast."

He said that he was "so sorry for everyone whose life has been turned upside down".

Hundreds of people have been evacuated from their homes in the worst-affected areas, which include south Wales, Herefordshire, Worcestershire and Shropshire.

What is the flood risk in my area?

If you are worried about flooding near you, please speak to an adult you trust. 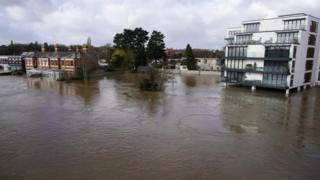 Yellow warnings for rain remain in place in south and north-west Wales until 2pm on Thursday 20 February. The Met Office says south Wales could see 50-60 milimetres (mm), and 70-100mm in north-west Wales.

Another yellow warning for rain covers part of north-west England until 3pm on Thursday, where up to 100mm could fall.

"In the worst case scenario we could see a month's worth of rain," said the Met Office's Craig Snell.

Other yellow weather warnings for rain are in place for: 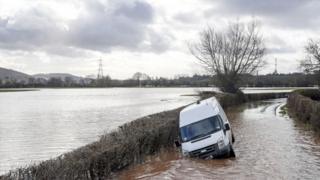 PA Media
This was the scene near the village of Hampton Bishop near Hereford, after the River Lugg burst its banks in the aftermath of Storm Dennis

A yellow warning for wind for north-east England, southern Scotland and Yorkshire are in place for 12 hours from 8am on Friday.

Meanwhile, animal charity the RSPCA said rescue officers had been called out more than 200 times in the past 72 hours - including to help 60 sheep, horses, a swan and chickens.

Storm Dennis: Floods warnings for England, Wales and other parts of the UK

Storm Dennis: How has it affected the UK?

Storm Dennis: Why do some places flood?