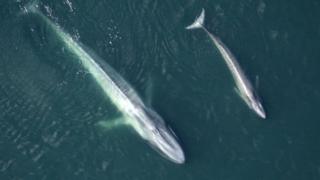 In just 23 days, 55 blue whales have been spotted near South Georgia - a sub-Antarctic island in the South Atlantic ocean.

After commercial whaling was banned by the International Whaling Commission in 1986, there has been lots of work to help protect whales around the world.

"To think that in a period of 40 or 50 years, I only had records for two sightings of blue whales around South Georgia," said scientist Dr Trevor Branch.

"So to go from basically nothing to 55 in one year is astonishing."

How low can a blue whale's heartbeat go?

Blue whales tracked by their songs

Why are blue whales so important?

Blue whales are still a very rare species and so some people are happy that so many have been spotted in the wild.

They are also the biggest animal on the planet - weighing around 150 tons on average. They can also grow to be as long as 30 metres!

Blue whales are thought to be some of the most intelligent animals on the planet - they can navigate and communicate with each other by vocalising.

In the right conditions, they can hear one another up to 1,000 miles away! 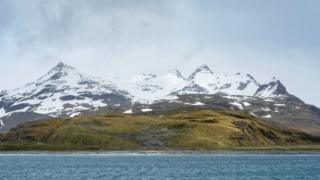 Getty Images
South Georgia is an island wildlife sanctuary, full of all kinds of animals from penguins to seals to albatrosses
Why are there so few blue whales in the wild?

The British Antarctic Survey reports that the whaling industry killed over 176,000 whales over a period of 60 years.

In the past, whales were often hunted for their meat, their blubber, their bone and other parts of their bodies.

Fears that many whales would be hunted to extinction led to a global ban on commercial whaling in 1986.

But some people living in isolated areas of the world, say whaling is crucial for survival, for example in Greenland and the state of Alaska in the USA. 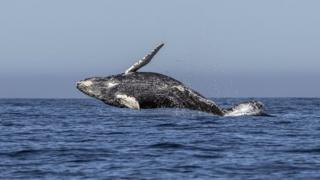 Getty Images
Humpback whale numbers have also been rising near South Georgia, with over 790 spotted during the three-week survey

And for countries like Japan and Norway, whaling is considered part of their culture - and they still hunt whales for commercial reasons.

Now numbers are growing again, there are some calls for whaling to return.

But conservationists say a growing population of whales is not enough of a reason for whaling to return, because whales are very intelligent creatures, and they believe hunting is unnecessary.

Blue whales are still an endangered species and there are thought to be no more than 25,000 living in the world today.

Blue whales: Heartbeat reduces to 2 beats per minute when feeding