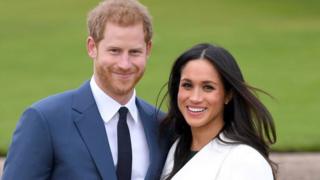 The Duke and Duchess of Sussex, who are currently living in Canada, are returning to the UK to carry out their final royal duties.

They will take part in at least six more engagements before they officially step back as senior royals on 31 March.

Earlier this year Harry and Meghan announced they didn't want to continue with their official roles as part of the Royal Family.

Before stepping back, some of the jobs they will have to do as part of the Royal Family include Harry recording music with rock star Jon Bon Jovi and the Invictus Games Choir, while Meghan will be marking International Women's Day a week later.

Loads more on Harry and Meghan

Their final engagement will be with the entire Royal Family at the Commonwealth Service at Westminster Abbey on 9 March.

They will attend the Invictus Games - a sporting competition that Harry created for wounded army veterans - together in May, but that won't be part of official royal duties.

Harry is also expected to attend the London Marathon as patron in April.

Harry and Meghan: Kids tell us what life's like in Canada

Meghan and Harry: Kids react to Duke and Duchess 'stepping back' from Royal Family