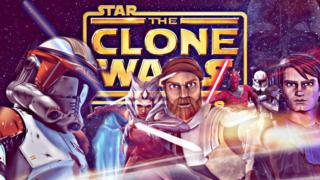 A long time ago a famous film studio not that far away bought Star Wars and cancelled one of its most popular shows.

Now, nearly seven years on from being cut short, the seventh and final season of Star Wars: The Clone Wars animated series is about to begin on Disney+.

'My teacher is called Luke Skywalker'

Newsround speaks to the cast of the new Star Wars movie

So why was it cancelled in the first place?

Back in 2012, Disney bought Lucasfilm, the company that makes Star Wars movies and TV programmes.

A year later, despite being one of the most popular Star Wars productions outside of the main movies, Disney announced it was cancelling The Clone Wars to "pursue a new direction in animated programming."

This was at a time where Disney threw out a lot of the existing Star Wars stories. The stories had been covered in books, comics, video games and spin-off TV shows.

These old Star Wars stories became known as 'Legends' and were no longer part of Disney's new version of the storyline. At the time most people assumed that this was the case for The Clone Wars animated series too.

This decision upset a lot of Star Wars fans who enjoyed the show. There were some unfinished versions of the seventh season that appeared online and lots of fans said they wanted Disney to bring the series back.

So now Disney say they've listened to the fans and the final season of Star Wars: The Clone Wars is about to begin on Disney+.

Which means it will be available to watch here in the UK, for those who pay for the streaming service that starts on 24 March. 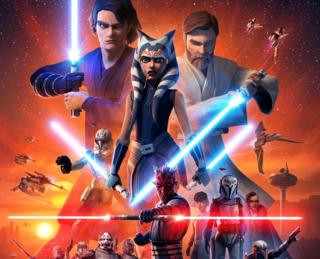 The series is set between two Star Wars movies; Episode II: Attack of the Clones and Episode III: Revenge of the Sith.

The Clone War is a war between the Galactic Republic and Separatist Army, it's called the Clone War because the soldiers fighting on the Republic's side are all clones of the bounty hunter Jango Fett.

How Newsround reported on Star Wars: Revenge of the Sith in 2005

The leaders of the Republic and Separatists don't realise that they're both controlled by the same person, the evil Chancellor (soon to be Emperor) Palpatine. He's the main bad guy from the very first Star Wars movie right the way through to the last one.

The Clone Wars series follows the adventures of Anakin Skywalker, Obi-Wan Kenobi and Yoda. It introduces fans to new characters, such as specific clone troopers like 'Rex' and Annakin Skywalker's apprentice, Ahsoka Tano.

Season five ended with Ahsoka leaving the Jedi Order while Anakin began to slide closer to the dark side. Season six, The Lost Missions, showed Yoda's missions during the war. 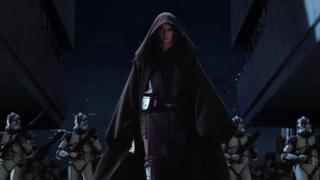 Lucasfilm/Disney
Series seven of The Clone Wars is expected to cover the events of 'Order 66', a plan to destroy the Jedi that first appeared in Star Wars Episode III: Revenge of the Sith

When the show was cancelled, fans were left disappointed as many wanted to see the series reach events seen during Revenge of the Sith, known as Order 66.

Order 66 is the moment where things go very badly for the Jedi; the Republic becomes the Empire, the clones become bad guys and Anakin becomes Darth Vader.

Now series seven will finally see these events play out on the small screen for the first time.

What do you think of the news?

What are you most excited about seeing in the new series?

Disney Plus: Problems on launch day

Staying at home 'making a difference' in slowing virus spread