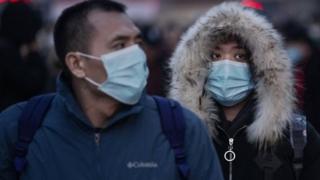 There has been a drop in the number of new coronavirus cases in China for the third day in a row.

The illness, which can affect people's breathing and lungs, has infected over 68,000 people in China.

In the UK, all but one of nine people being treated have been allowed to go home from hospital.

After medical officials in Hubei province changed the way they diagnosed the virus, more people have been able to get access to the medicine and care they need.

On Thursday, the 83 people who have been held in a hospital in the Wirral were allowed home after tests confirmed they did not have the virus.

They had spent two weeks in quarantine - staying in temporary accommodation in the Arrowe Park Hospital in the North West of England after they travelled to the UK from China, where the coronavirus originated.

The World Health Organization (WHO) has praised the response of the Chinese officials to the outbreak.

"China has bought the world time. We don't know how much time," he said. "We're encouraged that outside China, we have not yet seen widespread community transmission."

China's banks have said they are going to disinfect used banknotes before recirculating them in a bid to stop the virus spreading.

Coronavirus: Is everything you've heard true, or just a myth?

Coronavirus: 83 people allowed home after showing no signs of coronavirus