New £20 note: All you need to know about the plastic cash

The Bank of England is releasing a new £20 note.

The person who appears on the new note is famous British artist JMW Turner.

Next year we're set to have a new plastic £50 note too that will complete the set - meaning all Bank of England notes will be plastic.

Why are we getting plastic notes?

It was thought that plastic is more durable and stronger than paper, so fewer notes that need replacing.

The Bank of England estimated that the plastic notes would last five years compared to the paper notes' two years. 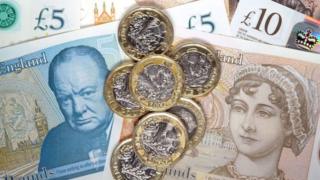 But earlier this year, it was revealed that the Bank of England had already released nearly 50 million new notes to replace ones that have already been damaged.

This has left many people wondering if they are better for the environment after all.

But the Bank believes this number of replacements is in line with their expectations.

"While we expect the polymer notes to have a longer life, it is too early in the note's lifecycle to yet understand the rate of replacement of polymer notes," the Bank said.

What is the Bank of England?

The Bank of England is the UK's central bank. It issues the UK's banknotes.

The £20 note is the most used note in the whole of the UK.

Often in Scotland and Northern Ireland different banknotes are used as well. These are printed by banks there. 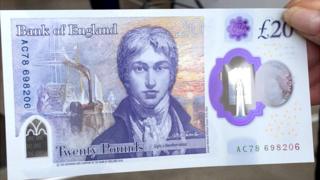 The reverse side will feature Turner and his famous painting
What's the problem with £20 notes?

£20 notes end up being the most forged - that's when people create a fake version of it.

Don't worry you will still be able to use the old paper £20 note until the Bank of England officially says people need to stop using it.

They will give six month's notice so you have lots of time to make sure you swap them for new notes.

New £50 note: Which British scientist should Bank of England put on the new note?