The Masked Singer: Who do you want to win the final? 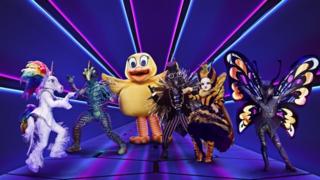 It's been one of the strangest talent shows anyone can remember and this weekend a winner will be crowned.

Yes - it's the grand final of The Masked Singer on Saturday night.

Hedgehog, Queen Bee and Octopus are looking to take the title.

Read on to see what we've found out about the contestants and who people think could really be behind the costumes.

Let us know in our Newsround vote which singer you'd like to win and tell us in the comments below who you support and why!

From New York to Blackpool - the sisters who street dance

Kids that have followed in their famous parents' footsteps

What do we know about the singers? 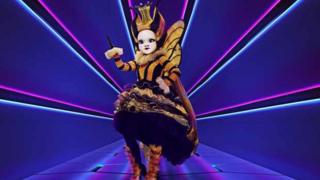 The Masked Singer/ITV
What have they sung so far?

The songs Queen Bee has sung so far include: Someone you loved by Lewis Capaldi, Alive by Sia and Heaven by DJ Sammy.

The clues she has given in her films include that she was famous in her youth, is the "joker of the pack", and could have French heritage.

She can also put on a number of different accents - such as a Liverpool accent, Newcastle accent and an American accent.

Loads of people think it's Nicola Roberts from Girls Aloud and some of the judges are convinced it's Little Mix's Jesy or Jade, or even Ellie Goulding. 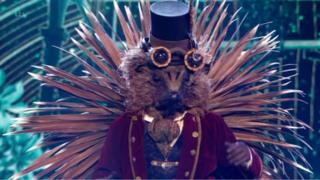 ITV
What have they sung so far?

The songs Hedgehog has sung so far include: Black Magic by Little Mix, Shine by Take That and Don't Look Back in Anger by Oasis.

Hedgehog has said they are "most happy on stage", they once had a job where they "died at 8.30 every night" and they are believed to have a connection with stage shows such as Phantom of the Opera and Hairspray.

We've had all sorts of suggestions for this one ranging from comedians Michael McIntyre and Jason Manford, to singers Alfie Boe and Michael Ball. Dr Who actor Bradley Walsh has also come up. 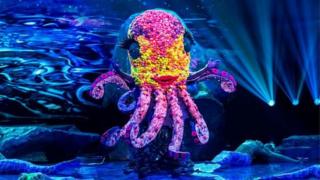 Getty Images
What have they sung so far?

Octopus has sung Part of Your World from The Little Mermaid, Splish Splash by Bobby Darin and the James Bond song Diamonds Are Forever by Shirley Bassey.

Octopus told us they are always "on the go". They were asked about modelling and said they had experience of the catwalk, and want to be a "role model" to kids. We also learned that Octopus has signed a record-breaking deal, can sing opera and is maybe linked to the TV show The Apprentice.

Octopus is a great singer and there have been loads of guesses for this one including: opera stars Katherine Jenkins and Charlotte Church, singer/dancer Ashley Roberts and her fellow Pussycat Doll and X Factor judge, Nicole Scherzinger.

The Masked Singer: Which two singers have been revealed?

The Masked Singer: What do you think of it?

The Masked Singer: What is it?