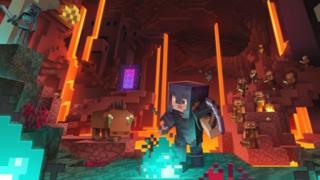 Minecraft/Mojang
The Nether just got a whole lot bigger!

A big new update to the Nether in Minecraft is finally here!

The Nether was first introduced into the game in 2010, and since then there haven't been too many changes to it.

It's a pretty intense area full of lava, Zombie Pigmen and Ghasts.

A Beta, or test version of this update was released earlier this year, but now the full update has been made available.

Gaming platform Mixer is shutting down

What is Netherite and where can you find it? 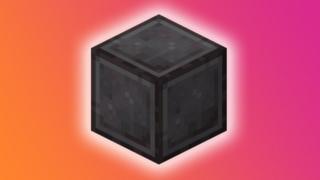 Netherite is a brand new material which the developers say can be used to "upgrade your diamond gear!".

It can be found in the lower depths of the Nether by mining Ancient Debris.

To make Netherite, players must refine it into Netherite Scrap by using a furnace, and then combining it with four gold ingots on a craft table.

This will then give players a Netherite ingot, than can be used in a number of different ways.

What can Netherite be used for? 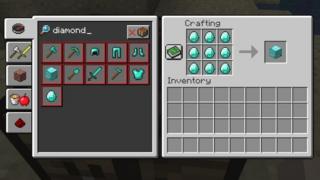 Minecraft/Microsoft/Mojang
What's that?! Better than diamonds I hear you say?!

If players combine this new wonder material with their armour, it will have a higher toughness and durability than diamond! Yes, tougher than diamond!

It also has knockback resistance, meaning players will barely move if they are hit with arrows.

Any weapons made with Netherite will also do more damage than diamonds.

Most interestingly Netherite can't be destroyed by lava - very useful for exploring the Nether!

What else is in the update? 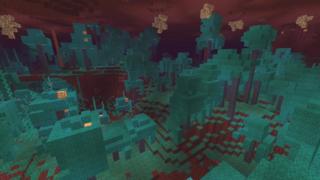 Minecraft/Mojang
Check out new biomes like the Warped Forest

The new update has brought a whole host of new biomes to explore such as the Crimson and Warped Forests which are full of mushrooms and mystery!

As well as the Basalt Deltas and the Bastion Remnants (home to Piglin and Hoglins - but more on those later!), Soul Sand Valley has been added, containing fossils and the mysterious remains of creatures from the past.

Blocks like Crying Obsidian have been added (which the developers at Mojang describe as "sad and cries purple energy"!) as well as Basalt, Blackstone and non-flammable wood like crimson stems and warped stems.

Alongside the new locations, a few new creatures have also been added.

What new mobs are in the update? 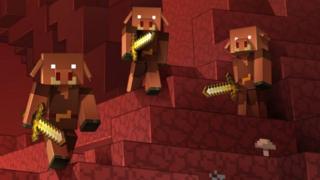 Minecraft/Mojang
Trust us, you don't want to get caught stealing from a Piglin...

Get ready to meet Piglins, Hoglins and Zoglins (oh my!).

Piglins are a pretty aggressive bunch who live in the Bastion Remnants and Nether Wastes in villages.

They love gold, and will trade with players for gold ingots. However, they will attack a player who doesn't wear the right armour, or who catch a player stealing from them.

Hoglins are big creatures that the Piglins hunt for food, and will attack players with a big knockback effect.

But be warned! If you try to bring a Hoglin back into the normal world it will turn into a terrifying new zombie enemy — a Zoglin! 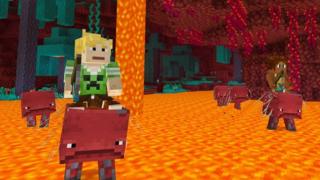 Minecraft/Mojang
Hitch a ride on a Strider!

Also new to the update are Striders - gentle creatures with long legs which allow them to walk over the rivers of lava with ease.

Players can now ride around on Striders, but they won't move unless you have some tasty Warped Fungi on a stick.

113 comments
Back to top
unknown