Could concussion substitutions be coming to the Premier League? 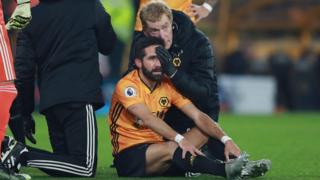 English football could soon see some big changes to help make sure players get the right medical treatment.

The Premier League has suggested to the International Football Association Board (IFAB), which is responsible for deciding all the rules of the game, that players who show symptoms of concussion should be replaced with a special temporary substitution.

A concussion is a mild brain injury normally caused by a bump or blow to the head.

Girls in football: The stats

The Premier League has proposed that the current three-minute period used to determine whether players have a concussion can still be used to decide if a head injury replacement is needed.

However, if symptoms are seen immediately or develop later on during a match, a player could be temporarily switched out for another for ten minutes while they are checked over by medical staff.

According to the plans, if a player shows no clear signs of concussion, they can continue to play but will be kept a close eye on by medical staff.

At the moment, teams are only allowed to substitute a maximum of three players during games. However, if the Premier League's proposed change is accepted, an additional substitution could be made if a player is thought to have a concussion.

"We welcome discussions by football stakeholders with a view to safeguarding players who suffer a concussion," FIFPRO general secretary Jonas Baer-Hoffmann said. FIFPRO is a global organisation representing professional football players across the world.

"FIFPRO strongly believes doctors must be given enough time and space to assess a player with a suspected concussion in order to enable them to make the correct decision on whether he or she can stay on the pitch. In our view, this means they must be provided with significantly more than three minutes."

The Premier League's proposals follow plans from the Scottish FA to ban heading for under-12s. The English FA has also called for limits on heading footballs for under-18s during training.

How do you self-isolate if you have symptoms?