Jurgen Klopp: Why isn't he at Liverpool's Shrewsbury game tonight? 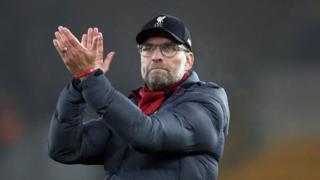 The Liverpool Under-23s team will be facing Shrewsbury Town on Tuesday evening, but Liverpool manager Jurgen Klopp won't be attending the game.

Both Klopp and his first-team players will be absent from the match at Anfield as they're currently on a winter break.

However, the under-23s coach Neil Critchley may get a supportive message from Liverpool's manager at half-time - as he did during the Carabao Cup quarter-final defeat at Aston Villa in December.

The first-team missed that game too because Liverpool were also playing in the World Club Championship that week.

'I want to produce an England captain at Liverpool girls' academy'

"When you get a message from the manager saying, 'Don't change anything, carry on doing what you're doing, you've been brilliant', it just clears all that doubt in your mind and you can give that message to the players," Neil Critchley said.

"The message killed every doubt, it settled them right down. It helped everyone at that moment," he added.

"That option is available on Tuesday, but that's up to the manager." 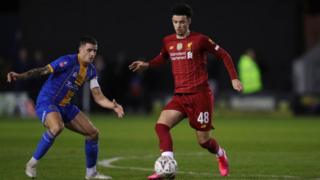 Getty Images
Liverpool will be taking on Shrewsbury Town in a FA Cup fourth round replay
What is the Premier League winter break?

This year, the Premier League has introduced a mid-season player break, for the very first time.

Clubs will get 13 days off in total and their breaks will be staggered. Eight of the Premier League teams will be playing during one weekend and 12 will take to the pitch during the other, allowing each team to get one weekend off in February.

There's been lots of discussion around the importance of breaks for football players. Lots of matches can cause exhaustion and injuries which can affect players' performance.

Some have criticised Klopp's decision to skip Liverpool's FA Cup game along with his first team. However, Critchley believes the players will still feel supported.

"He supports the young players unbelievably well," Critchley said of Klopp. "Even if he is not there, he is always felt by our younger players and by myself."