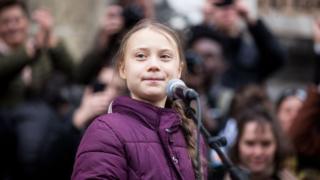 Teen climate activist Greta Thunberg has been in the news A LOT over the past year - and it seems to have inspired other young people to take action online about causes they care about too.

Ofcom, a government organisation that looks after things like TV, mobile phones, and the internet, has carried out a survey to find out what you and other young people have been doing, watching and the things you cared about most during 2019.

It found that almost a fifth of 12-15 year-olds are now using social media to show their support for causes and organisations they feel strongly about, by either sharing or commenting on posts

Ofcom calls this the 'Greta effect'.

It said 18% of you were more active when it came to the environment, politics or support for charities last year, with one in 10 signing a petition on social media.

The report was put together based on 3,500 interviews carried out with children and parents all over the country.

The report also said that while high-profile YouTube stars remain popular, children are now increasingly drawn to influencers who are more like them. 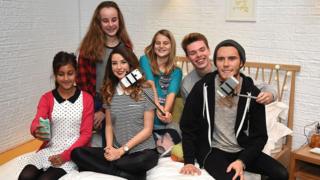 Getty Images
YouTubers Zoella and Alfie Deyes have become so famous they even got their own waxworks in Madame Tassauds in London.

Ofcom describes them as the "vlogger next door", because they might live in your area and be someone that you have lots in common with.

They could also be people your age who vlog about things you're specially interested in.

Another reason these kind of vloggers are becoming more popular is because they have fewer subscribers than more high profile YouTubers, and this means they can direct engage with their followers. Children also like how easy it is to imitate their content for their own social media channels.

It's not just the world of YouTube and vlogging where big changes have been going on. Girl gamers are also on the increase, Ofcom says. 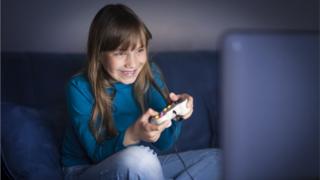 How are most children getting online?

More of you (68%) are using a tablet to get online than a laptop (55%). But mobiles are becoming more and more popular among children, with many of you saying you get your first phone when you reach the age of 10.

Half of children surveyed say they got their own phone at this age as they prepared to move to secondary school, with less than a quarter of nine-year-olds having their own mobile.

Maybe this also helps explain changes in the social media platforms children are using, with the messaging service WhatsApp growing hugely in popularity among 12 to 15-year-olds since last year.

Anyone using Whatsapp must be 16 or older.

Although lots of you are loving life on TikTok, it's still not as popular with older children as other platforms like Facebook, Snapchat and Instagram are.

One in 20 older children also use Twitch - the live streaming platform for gamers.

Much more of you are streaming content than children they did five years ago, with 80% of children using online platforms compared to 44% in 2015.

In 2019, fewer children watched traditional broadcast TV than streaming content (74%), with a quarter not watching normal TV at all.

YouTube is still the most popular place to watch videos, with 44% of children choosing it ahead of streaming websites like Netflix, Now TV, and Amazon Prime.

When asked what they would watch if they could only pick one, 32% of children opted for streaming services, while 17% of children chose TV channels like BBC and ITV.

Parents worry about their children being online

While it's exciting for us as we become more and more aware of what the can do online, we also need to be aware of the risks and how to use the internet as safely as possible.

The survey found that children are more likely to see hateful content online than they were in the past.

Half (51%) of 12-15s who go online had seen hateful content, for example comments or content directed at particular groups of people, based on things like their gender, religion, disability, sexuality or gender identity.

You can get lots of great tips on how to make good choices and protect yourself online at the BBC Own It.

The dangers of being online mean parents and carers are often worried about letting you use devices without supervision.

The report shows that parents increasingly feel that children's online use now carries more risks than benefits, and around many believe the internet does their children more harm than good.

Parents are increasingly concerned about their child seeing content which might encourage them to harm themselves (45%, up from 39% in 2018).

Similarly, two gaming-related problems are increasingly concerning parents: the pressure on their child to make in-game purchases of things like 'loot boxes', a virtual item containing rewards (47%, up from 40%); and the possibility of their child being bullied via online games (39%, up from 32%). 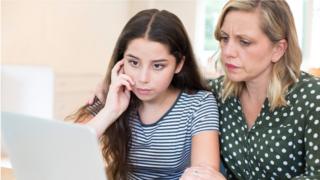 But despite this, the survey shows that parents are becoming more likely to trust their children with greater digital independence at a younger age.

Even younger children are more likely to be trusted with their own smartphone than they were five years ago, with 10% of parents trusting their seven-year-old to be responsible with their phone, and 94% of parents happy to leave their child to their own devices by the time they'd reached the age of 15.

The report said parents and carers are now more likely to speak to you about staying safe online than in the past, and are also nearly twice as likely to go online themselves for support and information about helping you stay safe than they were a year before (21%, up from 12%).

Safer Internet Day will take place on 11 February 2020 with the global theme of 'Together for a better internet', with this year's UK campaign entitled 'Free to be me'.

TikTok and WhatsApp top the app downloads for 2019

What's the difference between the internet and the world wide web?

1 day ago1 day ago
9
Newsround Home