Australia fires: A state of emergency has been declared for the country's capital

A state of emergency has been declared for the Australian capital of Canberra and its surrounding areas, also known as the Australian Capital Territory (ACT).

Bushfires are currently burning south of the city and officials have described them as the worst fire threat to the area in almost 20 years.

The main blaze is burning over more than 18,500 hectares, which is almost 8% of the ACT's territory.

More on the Australian bushfires

People living in Canberra have been asked to stay alert as they may need to be evacuated from the city at any time.

The ACT, which is home to around 400,000 people, has been impacted by bushfires before.

Fires caused damage to Canberra and its surrounding areas back in 2003 and 470 homes were left destroyed or damaged.

"There's now no higher priority for the ACT government at this time than the bushfire threat," said Australian politician and Chief Minister for the ACT, Andrew Barr.

He warned the fires "may become uncontrollable" as temperatures reached 40 degrees and blazes were fuelled by strong winds and dry weather conditions.

What does a state of emergency mean? 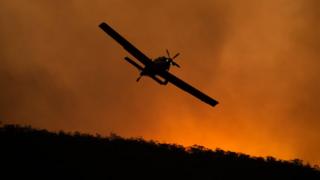 Getty Images
A state of emergency has been declared in Canberra

In Canberra, a state of emergency is declared when there is a serious threat to the area. It gives people living in the community time to prepare themselves for any potential outcomes.

The region's chief minister also appoints someone known as an emergency controller. They are given important powers to help manage the emergency to protect lives and properties.

The emergency controller can direct the movement of people in the area, take control of any premises and decide how key resources are used.

Australia fires: How did they start and why are they so bad?