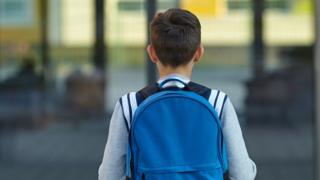 There's a huge difference between the mental health services children need and what is available, the Children's Commissioner for England has warned.

Anne Longfield, whose role it is to promote and protect the rights of children, says decent mental health services are a long way off and more needs to be spent to improve them.

The Children's Commissioner's report on mental health says an extra £50 million was spent on specialist mental health services for children in 2018/19.

But although 53,000 more young people started treatment, the report says many are still not getting the help that they need.

It says that whether children receive treatment and how long they wait is often dependent on where they live.

In some areas the waiting times for mental health services were an average of four weeks, while in others children and young people were waiting an average of ten weeks.

Pupils unsure how to get mental health help at school

Thousands of children not getting mental health treatment

Anne Longfield says: "We are still a decade away from a decent mental health service for all children."

She wants the government to commit to spending more on mental health services.

NHS Digital figures show that one in eight (12.8%) of five to 19-year-olds in England had at least one mental health issue when assessed in 2017.

The government's Mental Health minister Nadine Dorries says: "Spending on children's mental health is growing faster than spending overall in the NHS, backed by an extra £2.3 billion investment in mental health per year."

Scotland, Wales and Northern Ireland have their own Children's Commissioners.

If you are worried, anxious or feeling depressed but you are not sure who to speak to, call Childline on 0800 1111 or visit

Mental Health Awareness Week: How looking after your mental health could help you in school

Anti-Bullying Week: Online bullying and how to stop it

Young Carers Awareness Day: What's it like to be a young carer?