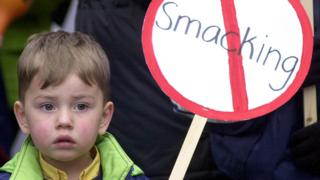 A law banning parents from smacking their children has been passed by the Welsh Assembly who make important decisions for Wales.

The ban will begin in 2022 making Wales the second UK country to ban smacking after Scotland.

Supporters say it will stop parents using physical force as punishment and give children the same protection as adults. But people against the law say it intrudes on the private lives of families and will punish parents.

The new law will remove the defence of "reasonable punishment" that has been used since Victorian times in England and Wales.

Learn more about this story

Children should 'speak out to keep safe'

What is the Convention on the Rights of the Child?

The NSPCC said: "This is a remarkable achievement which closes an outdated loophole and finally gives children in Wales the same legal protection from assault as adults."

Child welfare charities are now calling for a smacking ban in England and Northern Ireland.

Youth football: Scotland to ban children under 12 heading the ball