Young Carers Awareness Day: What's it like to be a young carer?

It's a day dedicated to the thousands of children and young people who care for a loved one with an illness or disability.

The UK census in 2011 found there were 166,000 young carers in England aged five-17 years, although it's likely that there are a lot more.

Ollie: I have had to grow up really fast

Being a young carer involves lots of responsibility. So what's life like looking after a relative?

We spoke to some young carers from Variety the Children's Charity to find out. 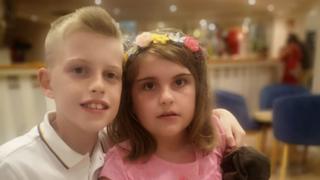 Billy is a 10-year-old from North Lincolnshire. He looks after his younger sister, Isla, who has autism. Autism is a development disorder and people with the condition may struggle with communicating and interacting with others. They may also get anxious or overwhelmed in certain situations.

Here's what Billy has to say about caring for Isla:

"Isla was three when she was diagnosed with autism. It was a struggle back then...we needed to help Isla overcome some of her difficulties.

"At the start people didn't understand what it was like to look after my sister, but now I have confidence to talk to my friends about it I feel a lot better.

"If I was in charge I would create a charity that would help young carers. We would have meetings where we could express our feelings and make each other feel happier." 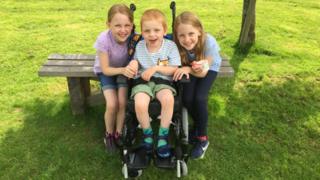 10-year-old twins Sophie and Ellie are the older sisters of six-year-old Finley. Finley has two conditions; epilepsy and global developmental delay, or GDD. Epilepsy is a disorder that affects the central nervous system. It can lead to seizures or periods of unusual behaviour and loss of awareness.

Children with GDD tend to take longer to reach key milestones in their development compared to other children their age.

Here's what Sophie thinks about caring for Finley:

"I have helped with Finley's care most of my life and we have started to help him walk down the stairs. I help him get dressed in the morning and run a bath for him.

"If I was in charge, I would make sure young carers known what to do and have a backpack with everything they need."

This is what Ellie had to say:

"Sometimes people think Finley doesn't have disabilities because they are not visible. Now he uses a wheelchair so it's more obvious.

"If I was in charge. I would help young carers by trying to make it more noticeable that they are caring for someone, like a membership for a special group." 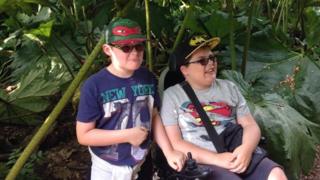 12-year-old Alex cares for his 14-year-old brother, Daniel. Daniel has a condition called Duchenne Muscular Dystrophy (DMD). It's a disorder that causes muscle weakness and wasting.

Daniel uses a wheelchair full-time and relies on others for assistance both at school and at home.

Here's what Alex has to say about looking after his brother:

"I don't think anyone really understands the life of a sibling with a brother or sister with a disability. If they had a sibling that suffers as Dan does then they might feel like me, worn out at the end of the day after school and then helping to look after Dan. 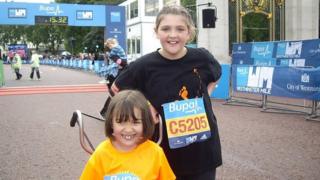 The muscles in Izzie's legs are contracted, which means she's unable to walk without help.

Here's what Milli had to say about her sister Izzie:

"Izzie and I are really close, and we are very similar. We both enjoy judo and dancing.

"I have always helped out with Izzie's care as I am her older sister, so I think it's part of my job to help look after her and help her with growing up and giving her fashion tips!

"If I was in charge, I would make sure every young carer has somebody they can talk to, someone they can go out with, without having to worry about the person they are caring for." 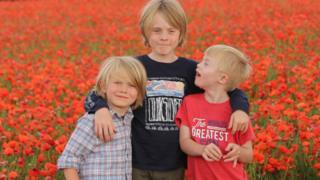 Nine-year-old Josh is older brother to six-year-old Toby and seven-year-old Harry who has Down's Syndrome. Down's Syndrome is a genetic disorder. People with it have distinctive facial features and they also have learning difficulties.

Here's what Josh had to say about caring for Harry:

"We are really close brothers; I've always helped him out with his care, I help get him changed, encourage him, play with him and include him in everything.

"I am the only one who can make Harry do things. Like when he refuses to move. I care for him and love him loads.

"If I was in charge, I would get schools and people to be more understanding of how hard it can be to be a young carer. Sometimes I haven't done my homework because we were all tired after helping Harry."

What is the government doing to support young carers?

The government introduced the Children and Families Act back in 2014. The law aimed to improve how young carers and their families are identified and how their needs are met.

"Young carers make an invaluable contribution in caring for those they love, which is why we changed the law to improve how young carers and their families are identified and supported," a Department for Education spokesperson told Newsround.

"Every young carer should be able to live a full life beyond their caring responsibilities. To support that ambition, for 2020-21, we are providing local government an additional £1 billion grant for adults' and children's social care, on top of the continuation of the £410 million social care grant. This builds on the £200 billion government has already made available to councils up to 2020."

If you are worried about any issues you have read about here, call Childline on 0800 1111 or visit

Freya: 'People don't understand what a young carer really is'

'There's a lot of ignorance' - A young carer speaks out