Up Helly Aa Shetland Viking festival: All you need to know

Up Helly Aa is the name of a spectacular Shetland Viking festival which always takes place on the last Tuesday of January.

The main celebration of Up Helly Aa takes place in Lerwick but there are 12 smaller local versions too all over the Shetland Isles.

Here's what you need to know:

Discover more about the Vikings

This Danish town has just got Viking traffic lights

What is Up Helly Aa?

Up Helly Aa (meaning Up Holy Day) is a huge spectacle, a celebration of Shetland history, and a demonstration of islanders' skills. 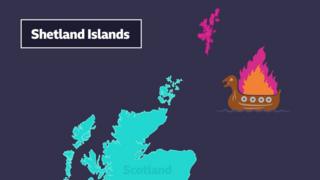 BBC/Getty Images
The festival takes place in Shetland, off the north east coast of Scotland

It harks back to Shetland's Viking heritage. As well as the main event there is a junior version, just for kids, which takes place on the same day.

The events last all day and involve a series of marches and visits, ending in a torch-lit procession and the burning of a Viking longship. 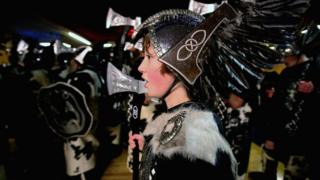 Getty Images
The Junior Guizer Jarl and his squad march along their route cheered on by the adult Guizer squad. They also build their own Viking boat with the help of their teachers and parents.

It's an event most of the local community takes part in, with loads of volunteers spending hours each winter getting ready for the big event and building the huge Viking longship that is at the centre of the festival.

Much of the preparations are done in strictest secrecy. The biggest secret of all is what the head of the festival, the Guizer Jarl, will wear and which character from the Norse Sagas - or stories from Norse history - he'll represent.

What happens on the day? 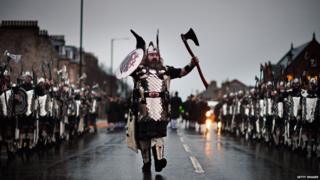 Getty Images
1,000 locals dressed as Vikings take to the streets for this famous event to celebrate Shetland's Viking heritage.

On the evening of Up Helly Aa almost 1,000 warriors or 'guizers', some in full Viking dress, parade in groups, known as 'squads', wearing helmets and carrying shields and swords.

Each guizer carries a fencing post, covered with sacking material soaked in paraffin.

Participants are called 'guizers' because they are in disguise!

Leslie Simpson was Shetland's first female Jarl at the South Mainland up Helly Aa in 2015.

While other Up Helly Aa festivals welcome women as guizers, in Lerwick it is still only the men who are allowed to take part. 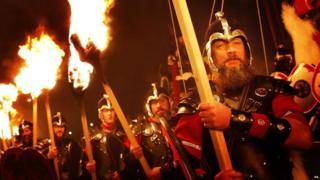 In Lerwick, at 7.30pm, a firework explodes over the town hall.

The torches are lit, the band strikes up and the blazing procession begins, snaking through the streets with the Guizer Jarl standing proudly at the helm of his replica longship, or 'galley'.

It takes half an hour for the Jarl's squad of Vikings to drag him to the burning site, through a crowd of 5,000 spectators or more. 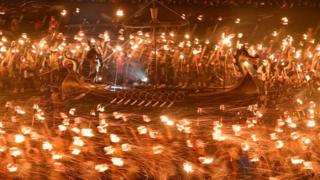 Getty Images
The participants set fire to their longboat during the event as a way to mark the heritage of the Scandinavian Vikings in Scotland.

The Jarl leaves his ship, to a crescendo of cheers. A bugle call sounds, and then the torches are hurled into the galley.

As the blaze destroys the shipbuilders' work, the crowd sings the song The Norseman's Home.