Brexit coin: The Brexit 50p has been unveiled 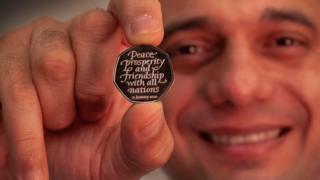 Brexit is coming, and with it, there is a new special 50p coin.

The commemorative coin has the words "Peace, prosperity and friendship with all nations". It is dated 31 January 2020, which is the date the UK will start the official process of leaving the European Union.

The coins will go into circulation from that date. 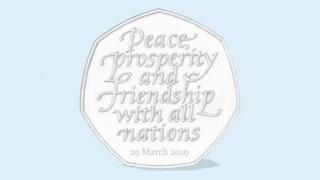 HM Treasury
The message on the coin hasn't changed, but the date has changed a few times due to Brexit delays!

The first set of Brexit coins were made and set to be released on 31 October 2019.

About one million were made and set to go into circulation for that day, but delays to Brexit meant they had to be recycled.

They were melted down and the metal from them put them aside until a new date had been set.

Well, now there is a date and about three million coins will be released on 31 January with seven million more coming later in the year!

Leaving the European Union is a turning point in our history and this coin marks the beginning of this new chapter.

Sajid Javid, who is Chancellor of the Exchequer (he looks after all things budgets) designed the coin.

He will give one to Prime Minister Boris Johnson later in the week.

What do you think about the coin? Let us know in the comments.