A team of scientists have managed to re-create the voice of an ancient Egyptian priest by using artificial vocal chords.

The researchers created the voice by producing a 3D-printed voice box.

The voice box used a precise scanning of Nesyamun's vocal tract - which is what you use to speak.

It is thought to be the first project of its kind to successfully recreate the voice of a dead person using artificial means.

Check out some more Egyptian stories: 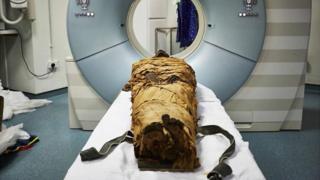 At the moment, the voice isn't properly developed and you can only hear a vowel sound which actually sounds a bit like a sheep baa-ing.

The research was done by academics at Royal Holloway, University of London, the University of York and Leeds Museum. It was published in the Scientific Reports journal.

It's hoped that they can now use the computer models to recreate full sentences in Nesyamun's voice.

Professor Fletcher, who worked on the study, said it was Nesyamun's "express wish" to be heard in the afterlife, which was part of his religious beliefs.

"It's actually written on his coffin - it was what he wanted," Prof Fletcher said. "In a way, we've managed to make that wish come true."