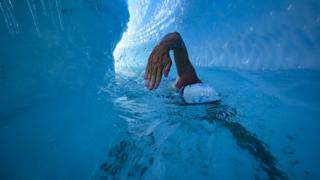 His motto is 'achieving the impossible', and for endurance swimmer Lewis Pugh is seems like he's getting close to it!

He's become the first person to swim under the Antarctic ice sheet, spending 10 minutes and 17 seconds under the water.

He did it wearing nothing more than his swimming trunks, cap and goggles. Brrrr!

Check out some other epic swims

The woman who swum the English channel 4 times!

Would you like to go swimming in a frozen lake?

Fancy a swim in the world's deepest pool? 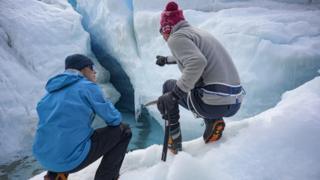 Lewis called it the "most frightening swim of my life", but also the most beautiful place he's ever seen.

He said: "It was every shade of blue. It started turquoise, then I swam around a corner and it was royal blue. And then it turned to indigo, and then a psychedelic blue."

The 50-year-old from Plymouth is one of the world's most celebrated endurance swimmers.

He was originally aiming to complete an even bigger challenge - to swim 1km (0.6 miles) across a supra-glacial lake in Antarctica - but the conditions meant that wasn't possible.

It's basically a pond on top of a glacier, which forms when melted water from a glacier collects on the surface of an ice sheet.

A study led by the team at Durham University that worked with Pugh discovered that more than 65,000 of these supraglacial lakes had formed on top of the east Antarctic ice sheet in January 2017 during the summer melt season.

Why do this challenge?

Lewis carried out the challenge to raise awareness of climate change and the need to protect the ocean from overfishing.

He has been jumping into freezing cold lakes and oceans for almost 20 years. In 2007 he became the first person to complete a swim across the North Pole.

He's also the only person to have completed a long-distance swim in every ocean of the world.

But with Antarctica holding the record for the Earth's lowest recorded temperature, Lewis has described his latest challenge as his toughest swim to date.

That's because to do it he has to abseil 70m down ice walls to the water, and with water temperatures coming in at just above zero degrees Celsius, Pugh also faced a severe wind-chill factor. 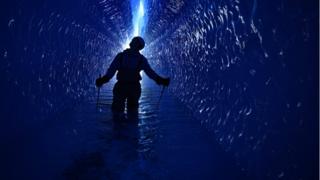 Describing his swim under the ice sheet, Lewis said: "The water was just above zero degrees and the risk is that this river can suddenly rush down a moulin, which are these large holes which drop hundreds of metres to the ground rock below, and then flow out to sea."

It's certainly not a task for the faint-hearted either!

He said: "It took me 33 years of training to swim those eight minutes down the tunnel yesterday, and a team of incredible French mountaineers to get me safely in the tunnel and out of it again.

He added: "I'm utterly determined to show the world what is happening here in Antarctica and protect this last wilderness area.

"This place is the frontline of climate change and of rising sea levels." 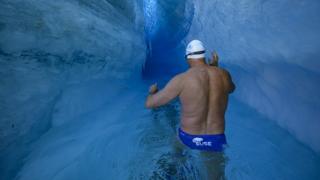 Recent data showed that Antarctica lost the same amount of ice between 2014 and 2017 as it had in the past 30 years.

Lewis hopes his epic adventure will help to draw enough attention to Antarctica's landscape that world leaders will take action to protect it.

Would you swim in this 45m-deep swimming pool in Poland?