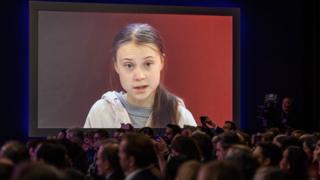 Greta Thunberg has called on world leaders to abandon fossil fuels in order to "save the world".

Speaking at a conference of the globe's most influential figures at Davos 2020, the climate activist said: "We don't need to lower emissions. Our emissions need to stop if we are going to save the world."

It was the second year in a row that Greta has addressed the leaders - including American President Donald Trump - accusing them of "empty words and promises" that will do little to stop a climate change crisis.

The World Economic Forum, which is being held in Swiss Alps village of Davos, is an annual meeting of the world's rich and powerful.

Its attendees range from politicians to business leaders to celebrities.

Check out everything you need to know about climate change:

Should you give up flying to save the planet? 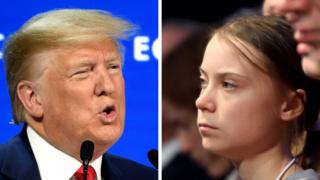 Greta was speaking after Donald Trump who, when asked about his views on climate activists, said: "These alarmists always demand the same thing - absolute power to dominate, transform and control every aspect of our lives."

In her speech, Greta addressed world leaders like Trump directly, saying: "Our house is still on fire. Your inaction is fuelling the flames by the hour. We are still telling you to panic, and to act as if you loved your children above all else." 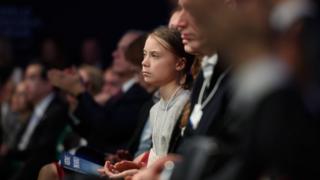 She spoke about the dangers of fossil fuels, arguing that the current plans to reach "net zero emissions" or "carbon neutrality" aren't enough.

Being carbon neutral means removing the same amount of the greenhouse gas carbon dioxide (CO2) from the atmosphere as you put in to it.

Net zero emissions means emissions from homes, transport, farming and industry have to be avoided completely or - in the most difficult examples - offset by planting trees or sucking CO2 out of the atmosphere.

"We are not telling you to keep talking about reaching 'net zero emissions' or 'carbon neutrality' by cheating and fiddling around with numbers," she said.

"We are not telling you to 'offset your emissions' by just paying someone else to plant trees in places like Africa while at the same time forests like the Amazon are being slaughtered at an infinitely higher rate", she added.

She said what's happening is "nowhere near enough" and she wants more effort to be made.

It's not about politics 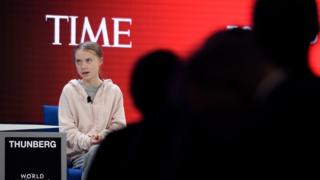 Greta added: "We couldn't care less about your party politics. From a sustainability perspective, the right, the left as well as the centre have all failed.

"No political ideology or economic structure has been able to tackle the climate and environmental emergency and create a cohesive and sustainable world."

She wants world leaders to listen to the scientists on climate change and tackle the problem according to their advice.

The celebs helping out during lockdown