Trump: Administration roll back healthy school lunch rules in US 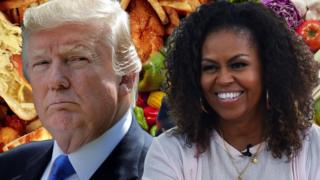 His administration - a group of elected people who help him make the rules - have been making changes to what is allowed on school menus.

It's aim was to increase the number of healthy options kids could eat at school, such as more fresh fruit, vegetables, milk and wholegrain foods.

Guide: How to make the perfect packed lunch

Pictures: School lunches from around the world

Should packed lunches be banned? 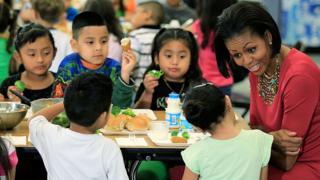 Getty Images
Michelle Obama introduced her healthy lunch plan, to help improve the diets of children in the US.

Trump's administration has now started to change those rules, meaning that it's easier for schools to serve unhealthy options like pizza, burgers and fries.

The changes were announced by the U.S. Department of Agriculture, which say that: "Local school food service professionals, will publish a proposed rule to provide flexibilities that will better enable schools to serve nutritious foods children will be eager to eat".

These new rules would give schools more choice to decide how much fruit to offer during breakfast and what types of vegetables to include in meals. It would also change the rules on what counts as a snack. 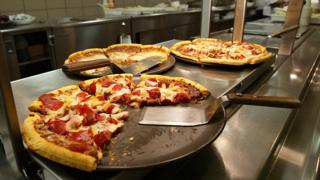 Getty Images
Some nutritionists are worried children might eat more unhealthy food at school under the new rules.

The secretary for the agriculture department said that schools had told them they were getting lots of food waste, from food not being eaten, and that they wanted more choice.

However nutritionists in the US are worried this might mean children will be getting unhealthier food options, which could lead to an increase in obesity.

Around 30 million children take part in the National School Lunch Program in the US, and of those 22 million are from poorer families, who might not normally have access to healthier food options.

What are your thoughts on this? Let us know in the comments below.

Find out what packed lunches mean for kids in Japan

How has Storm Dennis affected the UK?