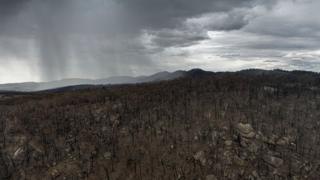 After months trying to tackle out-of-control bushfires, Australia is now experiencing severe thunderstorms and heavy rain, providing some relief to those battling the fires.

Heavy downpours swept across parts of Australia's east coast, with more than a month's worth of rain falling in less than 24 hours in some areas.

The rain has even caused flash floods in New South Wales, one of the states most affected by the bushfires.

Find out more about the bushfires

Australia has been battling an extended three-year drought, which combined with the hottest summer ever, has led to huge fires burning in the country.

Australia's bushfire season has so far burnt through more than 10 million hectares of land, claiming the lives of 28 people, destroying thousands of homes, and killing and injuring hundreds of millions of animals.

Now after the driest December on record, Australia's Bureau of Meteorology is forecasting more rain for Thursday and Friday, with more than ten communities seeing their heaviest rainfall in years.

Fire fighters in New South Wales described the rain as a relief, saying: "Although this rain won't extinguish all fires, it will certainly go a long way towards containment." 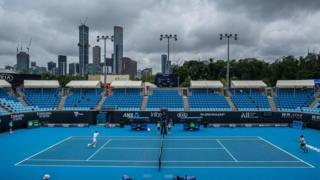 Storms have improved air quality in most parts of the state of Victoria, where earlier this week the city of Melbourne was covered by smoke disrupting the Australian Open tennis tournament.

More rain is forecast for Friday and the weekend which would be the longest sustained period of wet weather since the crisis began in September last year.

But bureau meteorologist Sarah Scully said the rain was "a bit of a double-edged sword". 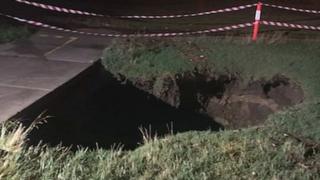 "Heavy rainfall and gusty thunderstorms bring the potential for flash flooding, particularly in the burnt-out areas of NSW and Victoria which are now vulnerable to landslips and trees coming down," she said.

The massive fires have burned through a lot of the trees, plants and grass that would normally soak up the rain, and there are concerns that so much rain falling in a short time period could lead to powerful flash flooding.

Several months of above average rainfall would be needed for Australia to recover from the drought, said Australia's Bureau of Meteorology.

It says the country would have to wait until March for rains to bring sustained relief from dry weather.

Australia fires: Kids reports on the smoke and fires

Australia fires: Fear there could be a 'mega blaze'