Fortnite: Ninja is getting his own skin 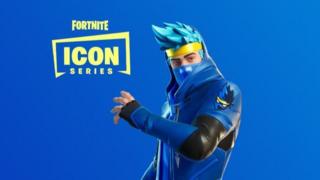 Gaming megastar Ninja is getting his own skin on Fortnite, and it's fair to say he's thrilled by the news!

The gamer, whose real name is Tyler Blevins, made the big announcement on his stream, shouting: "It happened. It's official, we finally got a Ninja skin. In the game. In Fortnite. We did it."

He also posted on social media writing: "I've dreamt of having a skin in Fortnite since I started playing the game. Today, my dream becomes reality."

Ninja thinks the skin looks just like him, with spiked blue hair, a blue jacket with a hood, and black jeans.

But if you do want to use the skin, it's only available for a limited time - between midnight on 16 January and 01:00 on 19 January.

Ninja isn't the only one getting special treatment from the game. Epic Games, who make Fortnite are planning a new 'Icon series' where they collaborate with musicians, artists, movies, fashion, and more to bring themed experiences to Fortnite.

Another famous face Fortnite has collaborated with is music producer and DJ Marshmello, who took to the Fortnite stage performing a show inside in the game. It became the biggest moment in Fortnite's history, with 10.7 million people watching.

Who do you think should get their own skin in Fortnite? Let us know in the comments below...