Sir David Attenborough has told the BBC "the moment of crisis has come" and climate change can no longer be avoided.

The naturalist and presenter criticised the progress that governments had made and said that people, especially young people, can see the problem so governments need to act.

"As I speak, south east Australia is on fire. Why? Because the temperatures of the Earth are increasing," he said.

"We have been putting things off year after year, we have been raising targets and saying 'Oh well, if we do it in the twenty years...' the moment of crisis has come, we can no longer [avoid it]," he said.

An important year of climate coverage on the BBC

The BBC has announced plans for a year-long series of special programming and coverage on climate change.

A raft of news services and shows are planned as part of the Our Planet Matters project.

Digital, TV and radio outlets will all take part. 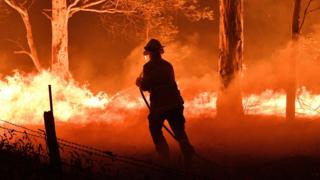 Global climate change experts have warned that allowing temperatures to rise more than 1.5 degrees this century would have hugely damaging effects for human, plant and animal life across the planet.

During the Paris climate talks of 2015 world leaders agreed to keep global temperature increase "well below" 2C (3.6F) and to try to limit it to 1.5C.

Sir David Attenborough: "The world is waking up" to plastic damage

A report in 2018 found instead that Earth was moving towards an increase of temperature. And research from organisations including Nasa and the Met Office which came out just this week said the last decade was the warmest on record.

Sir David said: "We have to change."

"That must force governments to take action. We have to realise that this is not playing games, this is not having nice little debates and then coming away with a compromise."

He also said: "This is an urgent problem that needs to be solved and what is worse we know how to do it. We are refusing to take steps that we know have to be taken and every year that passes makes those steps more and more difficult to achieve."