Eni Aluko: Why everyone's talking about the England forward 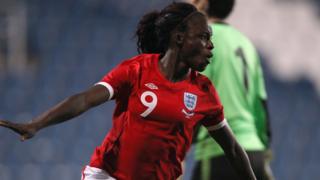 Known as Eni, she also played for Chelsea and has won more than 100 England caps.

The 32-year-old forward has played professionally in the United States, Italy and of course England.

Here's a look back at her career in numbers.

The 15-year-old taking Wimbledon by storm

To announce her retirement she wrote a letter to football itself, thanking it for the "crazy unexpected journey". As part of it, she mentioned how the sport gave her the chance to meet the Queen not once, but twice!

The first time was at Brunel University when Her Majesty presented her with an Outstanding Achievement in Sport award.

She said: "When she asked me a question, I got tongue-tied and got my words in a twist."

The second time went better though. Aluko was invited to Buckingham Palace for the Queen's Young Leaders Awards. She got to sit next to David Beckham and shoe designer Jimmy Choo!

"I felt like I had tumbled into a fantasy world," she said. 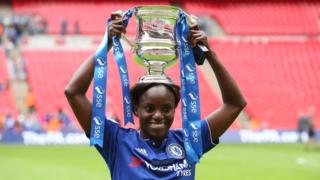 Aluko spent a total of eight years at Chelsea.

During that time she helped the team win two Women's Super League titles and two FA Cup victories - a competition she also won with Birmingham City in 2012.

Having scored 68 goals there, the club says Eni is still their all-time top scorer.

It's no surprise that she was named the first Chelsea Women Player of the Year! 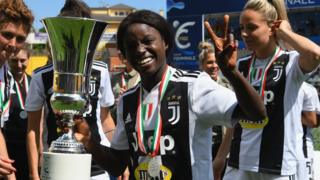 Whilst there, she helped them retain their league title and win the Coppa Italia and Scudetto.

In December she left the Serie A champions saying: "My heart is full to know that I have added three trophies at a special club as Juventus with special memories. I thank you all so much for this." 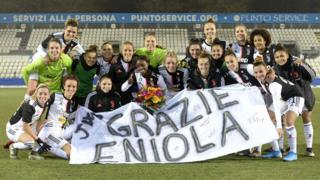 During her career, Aluko scored 33 goals for the Lionesses and she's also England's joint-10th most-capped international.

She first played for the team when she was 17 years old.

Her last international appearance was in 2016 after a total of 102 appearances for the squad.

My dear friend football, it's time to hang up my boots and retire as a professional footballer. Thank you football for everything you've given and taught me. Thanks for the full circle moments & crazy unexpected journey.

At the London 2012 Olympics she was part of the Great Britain team.

She featured in the squad that took on Brazil - and won - at Wembley in front of more than 70,000 people.

Looking back on the experience, she said: "What happened in London that summer, when Great Britain entered a women's team at the Olympics for the first time, changed my whole passion for the game, as well as the course of my career.

"You saved me. We won all our three games in the Group Stage, beating Brazil at Wembley, and reached the quarterfinals. It was electric. People suddenly had an appetite for women's football."

Plans for more girls' football in schools by 2024

Aluko has said she can't reveal what her next step will be, but that she "will keep working to drive the women's game forward".

She added, "I'll be striving to give women key positions in football, to help get the game more coverage, finance and growth and new opportunities."

We can't wait to see what she does next.

Womens World Cup: Inspiring the next generation of girls