Climate change: Should you give up flying to save the planet? 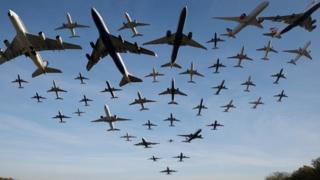 It's estimated that flying contributes around 2% of the world's global carbon emissions.

Many people like climate campaigner Greta Thunberg say people need to find alternative ways to travel and avoid flying by taking other types of transport, because greenhouse gases, produced when fuel is burned contribute to global warming.

Other people say flying is the best way to stay connected to other people in the world and there isn't yet an alternative which is as quick as flying.

We want to know what you think. Would you be able to give up flying completely? Let us know below.

Why is flying bad for the environment?

A return flight from London to New York gives out about 11% of the average annual carbon emissions for someone in the UK or about the same as those caused by someone living in Ghana over a year.

Altogether aviation contributes about 2% of the world's global carbon emissions, according to the International Air Transport Association (IATA).

When planes fly through the sky they also emit other substances that have a significant warming effect.

In Sweden, where Greta Thunberg is from the anti-flying movement is so strong there is even a word for flight shaming - flygskam.

The climate activist herself travelled by boat to the US for an important climate conference to avoid flying.

Some people have also criticised the government for helping the airline Flybe with a rescue plan.

They say to fight climate change, flights should not be made cheaper.

However, some people have family that live abroad and say that there is not yet a way of travelling long distances which is as efficient as flying.

Flybe: What's happened with the airline? And what's it got to do with climate change?