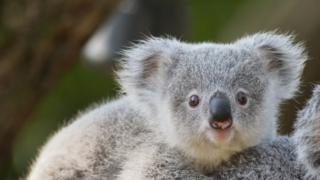 Getty Images
These little tree-climbing creatures aren't bears at all!

The fires in Australia have affected huge numbers of wild animals.

One that has been in the news a lot, as rescue teams try to save as many wild animals as possible, is the koala.

Thousands of the furry creatures are being cared for in sanctuaries across Australia, after escaping the fires.

But what do we know about these little leaf-eaters? Let's take a look. 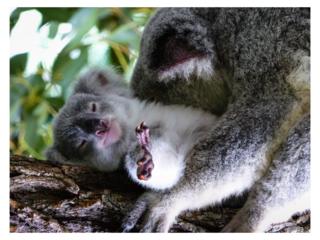 That's right, often people call them koala bears but they're not actually a bear.

They are a marsupial which means they have a pouch.

Like kangaroos, koalas carry their babies in a pouch - for up to six months!

When a koala is too young to eat a normal diet of leaves, the mother koala feeds her young, or joey, by making a special poo for them to drink. 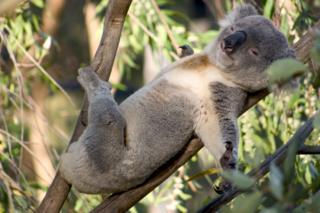 Getty Images
Koalas can sleep from 19-22 hours A DAY

Yes, a koala will sleep for a massive 22 hours a day!

Koalas need to sleep for between 18 and 22 hours because the things they eat, eucalyptus leaves, take lots of time and energy to digest.

They are usually tucked up fast asleep on the highest branches of a eucalyptus tree.

The word 'koala' means 'no drink' or 'no water' in the Aboriginal language. 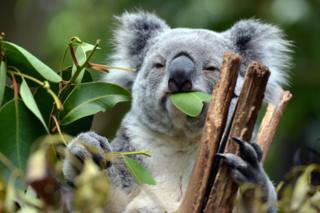 Getty Images
Before a nice 22-hour nap, koalas will eat as many leaves as they can

Koalas will eat 1.13 kilograms of a leaves a day - that's as heavy as a bag of rice.

It's said that they eat so many eucalyptus leaves that their fur smells like eucalyptus.

They are herbivores - which means they don't eat meat or fish - just lots of leaves.

They hop from branch to branch using their claws to grab them.

Eucalyptus leaves are poisonous to most other animals, but not koalas! All the more for them to enjoy.

Like many animals, including kittens, koala joeys are born blind.

4: Koalas have no sweat glands 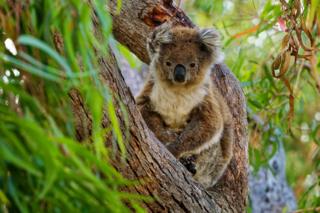 Getty Images
Temperatures can hit up to 40 degrees in Australia, so these trees keep koalas nice and cool

Instead they stay cool by staying as high up in the trees as they can.

What better place to take an afternoon snooze?

When koalas are born they are only two centimetres long - that's the same size as a jellybean.

5: Koalas are only native to Australia 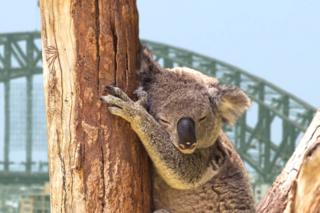 There are some zoos around the world which have captive koalas, but they are only naturally found in Australia.

They live in woody, bushy areas high up in eucalyptus trees.

The koalas really make the most of the eucalyptus trees - using them to shelter, sleep in, and eat.

Koalas talk to each other by making a noise like a snore and then a belch, known as a "bellow".