TikTok and WhatsApp top the app downloads for 2019 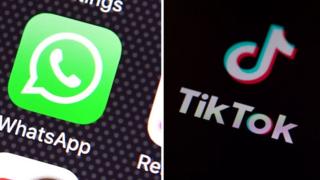 WhatsApp and TikTok were the most downloaded apps in the world last year according to a new report.

WhatsApp, which is owned by Facebook, came in at number one.

Could you give up social media for a month?

Terms and conditions explained: What are they all about?

Five things you need to know about TikTok

TikTok downloads saw a huge increase in the last three months of 2019, with almost 220 million installs according to the intelligence company Sensor Tower who published the report.

More than 700 million people downloaded TikTok during the whole of last year and the messaging service WhatsApp saw 870 million downloads.

According to their terms and conditions, TikTok users should be 13 and over, and Whatsapp is for 16 and older

India was responsible for nearly half of the TikTok's first-time downloads in 2019.

Own It: An app to help you stay safe online

Social media: Teens not getting enough exercise or sleep

Social media 'has a small effect on your happiness'