Fuel dumped over US schools as plane makes emergency landing 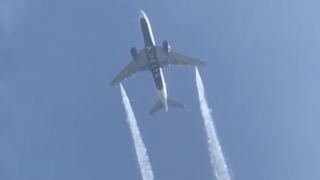 A passenger plane has dumped fuel over several schools as it made an emergency landing at Los Angeles International Airport in the United States.

No one was seriously injured, but at least 60 people, many of them children, have been treated for skin irritation and breathing problems.

The Delta Airlines flight was due to travel to Shanghai in China, but came back to Los Angeles airport after take off, due to an engine problem.

The rules say that planes are allowed to get rid of fuel if they need to make emergency landings, but there are some rules that pilots have to follow.

Normally it can only be released over areas where there are likely to be very few people.

Tennis stars forced to stop because of bush fires

It should also be at a high altitude so the fuel atomises - becoming almost like a spray, rather than a liquid - and spreads over a wide area before it reaches the ground.

Six schools have been affected. Some students were outside in the school playground at the time the fuel was dumped.

Delta Airlines said the plane had released fuel to reduce its landing weight, which means it can land much more safely in an emergency.

The Federal Aviation Administration, the part of the US government responsible for everything to do with air travel, "is thoroughly investigating the circumstances behind this incident".