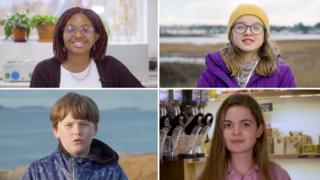 Thousands of young people across the world have joined together to stand up against climate change.

Thousands of children in the UK have taken part in climate protests, partly inspired by activists like Greta Thunberg, and joined a global movement to try to prevent climate change.

In July 2019 a survey by Newsround found that more than half of children don't think adults are doing enough for the environment.

Newsround spoke to four climate activists about what they do and what drives them in the fight against climate change.

Izzy: 'Climate change is not a debate'

She says she's been going on strike and talking to people on the street about the climate crisis.

As she can't vote, Izzy feels this is is the only way she can get her point across.

She told Newsround: "Climate change is not controversial, it is not a debate, the only debate is what we can do about it."

Fin: 'There won't be an ocean if we continue like this'

Fin, 12, is one of those people doing what they can to raise awareness.

He has been striking in his village in the Scottish Highlands and has travelled to Europe to meet with politicians.

Jessica: 'Once you become a part of the change, the world becomes a better place'

Jessica, 16, is a climate justice activist.

She is originally from Nigeria where flooding has left many people without homes.

She told Newsround: "Responsibility has been forced onto the youth."

Emma: 'Everyone has the power to do something'

Emma is a climate activist from near Manchester who has spoken at the UK Youth Parliament about the importance of climate change to young people.

She says: "It's so easy to think your one action can't do anything but it definitely can."

How to keep your pets safe during Storm Dennis

Who should win The Masked Singer?