Tennis stars forced to stop because of bush fires 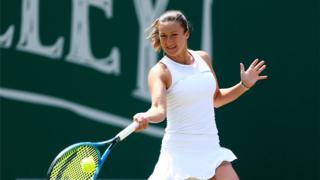 Slovenia's Dalila Jakupovic has been forced to retire from an Australian Open qualifying match after becoming scared she 'would collapse' because of the 'unhealthy' air quality caused by the bushfires.

"It was really bad. I never experienced something like this," the tennis star said.

And, she's not the only one. Canadian tennis player Eugenie Bouchard and Russia's Maria Sharapova have also been forced to leave the court this week because of air pollution.

The bushfires have been burning in Australia since July, with thousands of people having to leave their homes and an estimated 10 million hectares (100,000 sq km) of land being damaged (that's about the size of South Korea).

Check out some more information on the Australia Bushfires

What's it like in Australia for kids right now?

How did the fires start in Australia?

The Australian Open is held every year in Melbourne. However, it's one of the main affected areas in bushfire season.

Despite the authorities in the city warning people to stay indoors on Tuesday, the qualifying for the tournament continued after a small delay.

Organisers said the conditions were expected to improve and would be "monitored constantly".

In response, Jakupovic said: "I think it was not fair because it's not healthy for us.

"I was surprised. I thought we would not be playing today but we really don't have much choice."

5 things you need to know before you play Temtem