Just weeks after Venice in Italy was flooded, its canals have almost run dry.

Two months ago over 70% of the city was underwater.

The flooding left the water level at its highest in more than 50 years.

But, it was a very different picture this weekend as low tides caused Venice's famous gondolas and boats to sit at the bottom of canals. 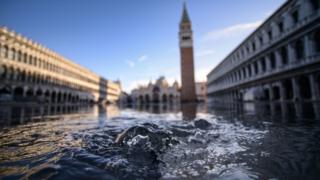 Venice is one of the world's most famous cities.

It's a Unesco World Heritage Site. 50,000 people live there and it gets 36 million visitors each year.

The city, which is built on a collection of 118 small islands, is navigated by canals and more than 400 bridges.