Storm Brendan has hit the UK, bringing heavy rain and gusts of more than 80 miles per hour to parts of the country.

The Met Office, who monitor the UK's weather, issued a 14-hour yellow warning for wind on Monday, covering the west coast of the UK, Northern Ireland, parts of Wales and north-east Scotland where schools closed because of the storm.

Want to know more about storms?

What is a yellow weather warning?

Yellow weather warnings can be issued by the Met Office for lots of different types of weather.

It means the weather is likely to have some low level impact, for example travel disruptions.

Many people might be able to carry on as normal but others will be directly affected.

Comhairle nan Eilean Siar, which is the Western Isles council in Scotland, closed all its schools and bus services were cancelled. There were disruptions to ferry routes.

Trains in and out of Preston were delayed after the station roof was damaged by wind, and flights between Cornwall and the Isles of Scilly are suspended. Seven flights which were scheduled to land at Gatwick in London were diverted to other UK airports on Monday evening. 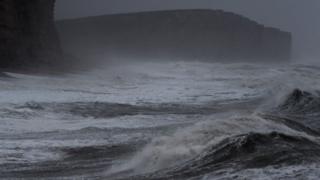 A school was closed due to a power failure after a tree fell on power lines in Bontnewydd, Gwynedd in Wales. In Northern Ireland, lots of roads were shut and thousands of homes lost power.

Storm Freya: What has happened and is it over now?