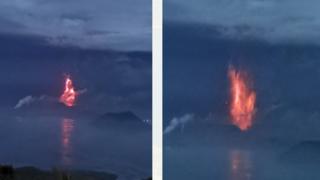 Phivolcs
Lava has began flowing out of the Taal volcano

A volcano in the Philippines, in Southeast Asia, has begun spewing lava, with experts warning that an eruption is possible within the next few hours or days.

Ash began falling on Sunday, with 8,000 people being evacuated from the area near the Taal volcano which is located on an island south of the capital city Manila.

The volcano is the Philippines' second most active volcano and has recorded at least 34 eruptions in the past 450 years.

The Philippine Institute of Volcanology has warned that 450,000 who live near by are in danger if the volcano erupts as predicted.

Check out some more information on volcanoes:

Authorities have also warned that an eruption could cause something called a "Volcanic Tsunami" because of falling material from the volcano.

On Sunday 12 January, tremors were heard and a giant cloud of ash fell on the nearby area, with residents warned to wear masks.

Three towns have been evacuated and thousands of people have gone to safer areas.

Taal is a "complex volcano", which means it doesn't have one vent or cone but several eruption points which have changed over time.

A previous eruption of Taal in 1974 lasted several months. 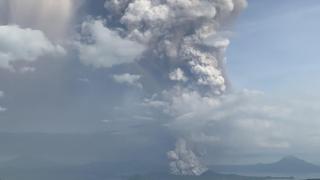 However, it's one of the smallest active volcanoes in the world.

Earthquakes and volcanic activity are fairly common in the Philippines because it's in a part of the world called the "Ring of Fire" which is a zone of major seismic activity. This means there are lots of vibrations of the earth and its crust.