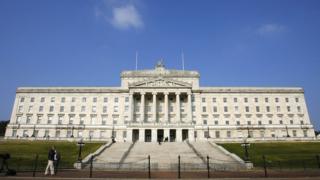 AFP/Getty Images
Stormont is the home of the Northern Ireland government, which was dissolved after an argument between the two parties in power

The Prime Minister, Boris Johnson says the UK government "strongly supports" the Northern Irish government after it came back after three years of arguing.

The British and Irish prime ministers were in Belfast to mark the occasion.

Mr Johnson said: "What's so great about today is, as I say, that Northern Ireland politicians have put aside differences, stepped up to the plate and shown leadership."

Both the UK and Ireland say they are prepared to put new money in to help services in the country and the prime minister said this was a chance to "deliver on the priorities of the people" in terms of health, education and crime fighting.

Northern Ireland's government was dissolved in January 2017 after a power-sharing agreement between the two governing parties - the Democratic Unionist Party (DUP) and Sinn Féin - fell apart.

But the two parties have now re-entered the devolved government at Stormont, after agreeing to work together again.

On Thursday 9 October the deal called New Decade, New Approach, was published by the British and Irish governments.

Devolution is the process whereby the UK parliament in London gives Northern Ireland, Scotland and Wales powers to make their own decisions over certain areas, for example health or education.

Politicians are elected to a devolved government, called an assembly in Cardiff and Belfast, and the Scottish Parliament in Edinburgh. 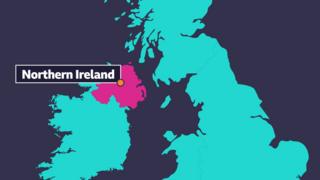 Whilst there wasn't a government, people who work for the government called civil servants had extra powers so they could run the region's public services. If the parties hadn't agreed then a new election would have been called.

Stormont is the commonly used name to refer to the Northern Ireland Assembly, which is based in the Stormont Estate, in east Belfast.

The assembly is where political business relating to Northern Ireland takes place, with laws made and looked at by 90 elected representatives.

What is in the deal?

The petition of concern was put together to protect the minorities in Northern Ireland's power-sharing government.

At least 30 politicians can sign a notice and present it to the Speaker if they have concerns about a motion before the Assembly.

But it has been used to block issues such as the legalisation of same-sex marriage, this was eventually passed by the government in Westminster.

In the new deal, the people must be from two or more parties, so that one party cannot block a decision.

Why does Northern Ireland have no government?

There is official recognition of both Irish and Ulster-Scots languages.

An Irish Language Commissioner and Ulster Scots/Ulster Commissioner will be appointed to protect the two languages.

The deal also includes the idea that there should be a separate climate change act for Northern Ireland - the only part of the UK without these laws.

Up until now, Northern Ireland has had to follow laws set by wider UK legislation on climate change.

It suggests an independent environmental protection agency, to hold government to account, and make sure environmental targets are followed.

Brexit: What is happening with Northern Ireland's border?