What are brands doing to protect the environment? 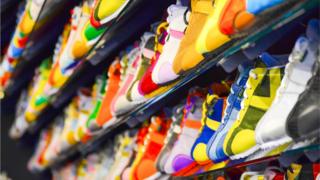 Trainers, creps, sneakers, kicks - whatever you call them, they're big business. Many popular trainers are designed by some of the biggest names in the world and can be sold for thousands of pounds.

According to the research group Kantar, the total spend on trainers has grown by 30% over the past five years.

The rise in spending on trainers is largely being driven by the athleisure trend, where people wear clothes traditionally used for exercise on a daily basis. Spending on trainers worn for fashion has gone up by 37% since 2015, while the purchase of trainers for playing sport in has actually fallen by 1.1%.

Want to read more about all things trainers?

Are these the most bizarre trainers EVER?

These trainers cost how much?!

Trainers made completely of plants

So why are casual trainers so popular? And, after a report said how trainers are produced can be bad for the planet, what effect does so many being worn have on the environment? We've been talking to some key people in the trainer industry to find out.

Where did trainers come from?

When trainers were first made, they were a shoe that people would wear for exercise or the gym.

It's hard to tell when the first ever pair of trainers were made but some people say it's as early as the 18th century.

As time went on, trainers became more comfortable and were designed in ways that made them good for sports and exercise.

By the 1970s, much-loved brands like Nike, Adidas, Puma, New Balance and Reebok had been created and people were wearing trainers every day.

Why is there such a big hype around trainers?

The hype (or excitement) around trainers began when celebrities like athletes and musicians started wearing and promoting certain brands.

In 1921, a famous basketball coach called Chuck Taylor was hired by Converse to travel around the United States to help promote its All Star brand. He designed the white high-top model, a trainer which proved so popular that it even became the official shoe for the US basketball team during the Berlin Olympics in 1936!

In 1984, Nike designed a shoe exclusively for basketball player Michael Jordan called The Air Jordan 1. It now has a whole line (known as Jordans) which are some of its most popular trainers.

And in the late 80s, a hip-hop group called Run-DMC, who were known for wearing Adidas Superstars, released a song called 'My Adidas' inspired by their favourite trainers.

We spent a massive £1.68 billion on trainers which weren't purchased for sport last year!

Fast-forward to the present day, where we now see some of the world's biggest designers, musicians and sportspeople create and promote lots of the most popular trainers.

Derek Morrison is the director of a popular trainers trading app and he's also a massive "sneakerhead". He told Newsround that at the moment, the most popular and expensive trainers are anything designed by rapper Travis Scott and current artistic director at fashion house Louis Vuitton, Virgil Abloh.

What impact do trainers have on the environment?

A report carried out by the Massachusetts Institute of Technology in 2013 found that making a pair of trainers can be really bad for the environment.

It said they were often made in coal-powered factories, and are made up of lots of different parts which need plenty of raw materials and often can't be recycled.

Head designer at Puma, Tracy Goodsmith, told Newsround that even though companies are doing a lot to find cleaner ways to make trainers "it will never be enough" - although they are taking the science very seriously.

New Balance designer Sam Pearce also said that companies may be 20 years too late when it comes to being sustainable but it's something all companies should be thinking about.

So what are companies doing about it?

Adidas have said that from 2024, only recycled polyester will be used in every product and Puma say that they have introduced several ways to improve sustainability in their manufacturing process.

New Balance have said that that the sustainability challenge is real and that now is the time for more action and have also said they have signed up to a commitment to become 100% renewable and signed up to the UN Fashion Industry Charter for Climate Action.

We have reached out to Nike and are still waiting for a response, though the company has previously said it wants to halve its environmental impact.

What is the future of trainers?

So, what could your trainers look like in the future?

There's lots of new tech in the works that could make trainers even more exciting! 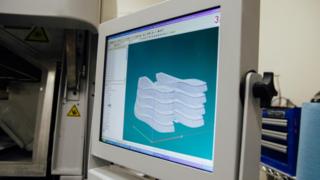 Tracy Goodsmith from Puma says we could reach a point where we could grow materials to make trainers out of DNA.

Sam Pearce from New Balance told Newsround that we will soon be able to PRINT our own trainers in the near future using 3D printers - that's pretty trainer-rific!