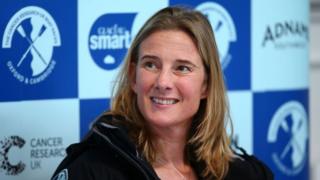 The Oxford-Cambridge boat race is one of the most famous events in the world and this year a woman will umpire the men's race for the first time.

Sarah Winckless, who is a former Cambridge University student, will make sure everyone is playing by the rules at the race on 29 March.

She said "it's a real honour and responsibility" to be the first female umpire. 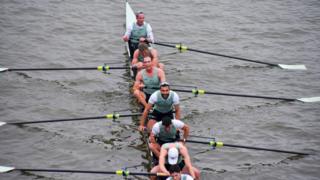 Getty Images
Cambridge won the race in 2019.
What is the Oxford-Cambridge Boat Race?

It's a competition that takes place between two of the oldest universities in the world, Oxford and Cambridge.

The yearly event takes place on the River Thames in London over a 4.2 mile course.

The first ever Oxford-Cambridge Boat Race took place in Henley-on-Thames in 1829 when a Cambridge student challenged an Oxford student to a race but it didn't become a regular fixture until 1856! 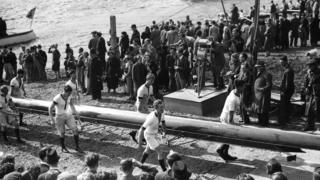 The Boat Race was first shown on TV by the BBC in 1938.
What does an umpire do?

Being in charge of a major event like the Boat Race is no easy task.

The umpire has to make sure neither crew goes outside of their own racing line and sticks to the rules (there are 10).

The rules of the race state the crews must keep to their stations (the Middlesex or Surrey sides of the river) unless they have a lead of "clear water" when, if they wish, they can use the opposite station.

But they have to row through the centre arches of two bridges where they often come really close to each other. 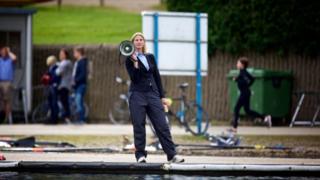 British Rowing
Sarah Winckless will take the role of umpire on 29 March.

Sarah is well qualified to be an umpire as she's competed in three Olympic Games and won a bronze medal in Athens in 2004 with doubles partner Elise Laverick.

She was also awarded an MBE in the Queen's Birthday Honours in 2015 for services to sport and young people.

Why is this year's Boat Race a big deal?

Why it's important to stay at home this weekend

When is Disney's Mulan coming out now?

The Labour Party has a new leader