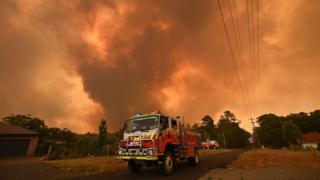 Rising temperatures which went above 40C and strong winds have made it more difficult to fight the fires.

New South Wales, the state in Australia that has the biggest population, has declared a state of emergency for a second time in two months and three blazes around Sydney are burning at emergency level.

Around 10,000 emergency personnel have been sent to tackle more than 100 fires.

Roads and highways have been closed in New South Wales and the state of South Australia and authorities have asked Christmas travellers to delay their journey as the crisis continues.

What impact have the fires had?

Since September, Australia's bushfire emergency has destroyed more than 700 houses and scorched huge expanses of bushland.

Eight people have died because of the fires since the crisis began.

Two volunteer firefighters died on Thursday as they were tackling a large blaze near Sydney in New South Wales.

Is climate change to blame for the fires? 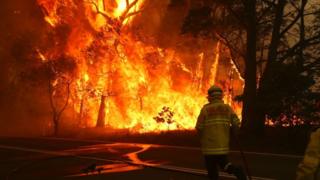 Although bushfires often happen in Australia, officials are saying they have never been as big as the fires currently burning in the country.

While climate change is not the cause of bushfires, scientists have long warned that a hotter, drier climate would contribute to Australia's fires becoming more frequent and more intense.

Prime Minister Scott Morrison has been criticised for his reaction to the crisis and he has had to apologise and come back from a holiday he took during the crisis.

Some people say he and his government have not been serious enough about tackling climate change.

But the prime minister has dismissed a connection between the fires and his government's policies.

But Australia's Deputy Prime Minister Michael McCormack has admitted that more needs to be done to tackle global warming.