Donald Trump has been impeached after vote 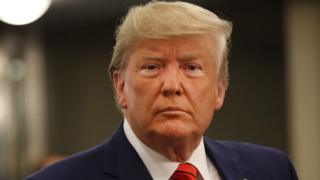 Donald Trump has become the third president in US history to be impeached.

It's after politicians there voted to put the president on trial.

Impeachment proceedings are a rare event in the US and are a final check on the president's power.

Why is Donald Trump being impeached?

The House of Representatives, which is one half of The United States Congress, made the decision after voting on two charges against Mr Trump - abuse of power and obstruction of Congress.

The House is divided between two parties and the members voted according to their party. So, Republicans (which is the party the president belongs to) voted against the charges, while Democrats voted for them.

Only two presidents in US history have ever been impeached; Bill Clinton in 1998 and Andrew Johnson in 1868.

When it came to the trial neither were found guilty and they stayed in their jobs.

After the impeachment vote, a trial will then be held in the Senate - the second half of Congress.

We don't know yet when this will take place.

The speaker of the House of Representatives, Nancy Pelosi, needs to hand the articles of impeachment over to the Senate, but she has not said when she will do that.

She's also said that she wants to make sure the Senate will hold a "fair trial".

How likely is it that Donald Trump will lose his job?

The Republican Party, which the president is part of, has a majority in the Senate.

This means it is highly unlikely he will actually be removed from office when senators cast their votes.

Republican Majority Leader Mitch McConnell said last week that Republican senators would act in "total co-ordination" with the president's team during the trial. This didn't go down well with Democrats who pointed out that Senators are obliged to act as impartial jurors. 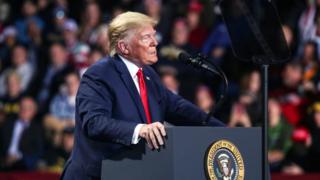 Reuters
How has Donald Trump reacted?

As voting took place, President Trump was addressing a campaign rally in the state of Michigan.

He told a cheering crowd: "While we're creating jobs and fighting for Michigan, the radical left in Congress is consumed with envy and hatred and rage, you see what's going on."

The White House released a statement saying that the president was "confident" that he would be cleared in a Senate trial.