Meerkats perform 'war dances' to scare away other clans 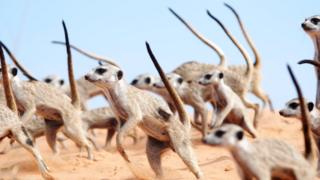 Who doesn't love an adorable little meerkat? They're cute and have amazing bushy tails and big brown eyes.

But, it turns out they aren't always as sweet as you might think!

Meerkats are territorial animals and they tend to stick together in groups. A new study suggests interactions between these clans can get pretty heated.

Researchers at University College London (UCL) and the University of Cambridge noticed that more than half of the interactions between meerkat gangs led them to either try to chase one another away, or put on a special war dance.

QUIZ: Are these animals right or left handed? 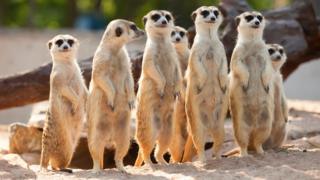 When confronted by another clan, meerkats puff out their fur and make their tails stand up to try and make their group seem a lot larger than it actually is.

These clashes can sometimes lead to fighting as groups do their best to mark their territory, although brawls aren't actually that common. Phew!

The researchers found that in almost nine out of 10 cases, aggressive interactions ended with one of the two gangs backing down before a physical fight can happen.

Despite standoffs rarely turning physical, there's still a lot to lose though, if a meerkat clan is overpowered by another.

Dr Mark Dyble, an evolutionary anthropologist at UCL, said: "Even when interactions between meerkat groups do not result in physical violence, they may have territorial consequences, with losing groups moving to sleeping burrows closer to the centre of their territory and winning groups moving to burrows further from the centre of their territory."

Therapy animals: From dogs to pigs - what are emotional support animals?