Check out this cute baby rhino!

The greater one-horned rhino was born at ZSL Whipsnade Zoo.

The World Wildlife Fund (WWF) says the species is 'vulnerable' which means it's considered to be facing a high risk of extinction in the wild.

It was born on Sunday 8 December and its parents are called Behan and Hugo. The calf hasn't been given a name just yet, but one lucky person will get the chance to decide what it'll be called!

Take a look at these top 10 baby animal pics

A 'tail' of friendship between a dog and giraffe 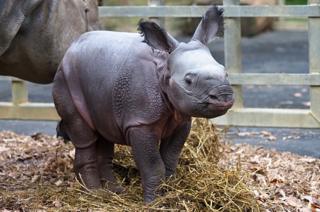 There are around 3500 greater one-horned rhinos left in the wild.

Behan's pregnancy lasted 16 months which is about seven months longer than a human pregnancy.

The baby rhino's weight came in at 70kg - that's more than 20 times the average weight of a human baby!

The rhino was born with furry ears and pink folds of skin, far from what we'd usually expect the animals to look like. However, its skin will toughen up over time.

ZSL team leader Mark Holden said: "We knew Behan was expecting so ZSL's zookeepers have been keeping a close eye on her throughout the 16-month-long pregnancy - we checked on her the night before and found her calm and relaxed in her indoor dens.

"Coming in early the following day they were delighted to find a healthy female calf standing next to her mother, having been born in the early hours."

The calf has been born as part of the European Endangered Species Programme (EEP) for the species. It's the fifth of Behan's babies and the 15th greater one-horned rhino to be born at the zoo.

If you could give the baby rhino a name, what would you call it? Let us know in the comments!

How is a dog helping to save rhinos?

Conservation: How experts are trying to save the northern white rhino from extinction

What is the TV licence fee and why are people talking about it?