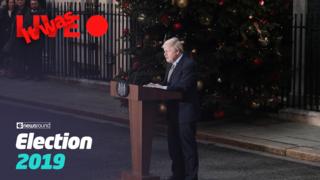 The Conservative Party has won the UK general election, winning the most seats in Parliament and getting an overall majority.

Here's the key things to know:

General election: What happens next?

You can look back at how the election results unfolded with our live blog from the day below.

Let us know what you think about the result in the comments.

4pm - That was election day.

The Prime Minister is back in Number 10 planning for the next five years. We'll leave things there with the live blog and if you want to know what's coming next... well, read our guide to what happens next. 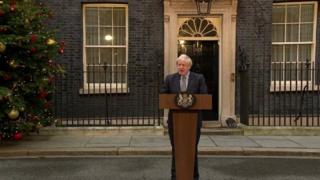 Boris Johnson, the Prime Minister, first speaks to people who voted for him and his party: "I say thank you for the trust you have placed in us and me, and we will work around the clock to repay your trust and deliver on your priorities."

He then speaks to people who he thinks may not have voted for him, saying: "We in this one nation Conservative government will never ignore your good and positive feelings of warmth and sympathy to the other nations in Europe".

He ends his speech by wishing everyone a Happy Christmas and going back in to Number 10!

It took a while for some votes to arrive from islands off the Cornish coast, but we've finally got the last result from St. Ives, and it's another Conservative MP.

The party hold the seat with an increased majority over the second-largest party, the Lib Dems.

2:11pm - Jo Swinson on her campaign for the Liberal Democrats. 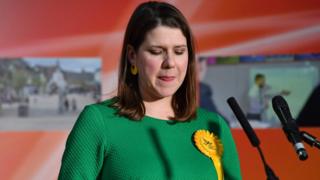 Jo Swinson lost her seat as an MP and has resigned as her party's leader.

"Obviously it hasn't worked," she said, "and I like you am devastated but I don't regret trying, trying everything,"

1:30pm - Jeremy Corbyn on when he'll stop being Labour leader. 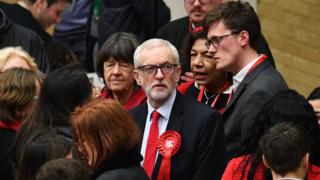 Labour leader Jeremy Corbyn has spoken about when he'll step down.

"It will be in the early part of next year sometime.

"I was elected to lead the party and I think the responsible thing to do is not to walk away."

He explained that other important Labour members will decide how the party organises electing their new leader. 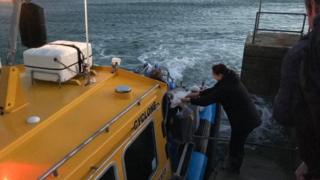 Bryher Campsite
A jet boat has collected the delayed ballot boxes from the Isles of Scilly
12:30pm - There's still one seat to be announced.

We're still waiting for one more result to come in because a count has been delayed by bad weather.

Votes from the Isles of Scilly off Cornwall cannot be counted until the papers have been collected by boat and taken to the largest island in the area, St Mary's.

The boat was delayed because of strong winds last night and the result is expected later this afternoon. 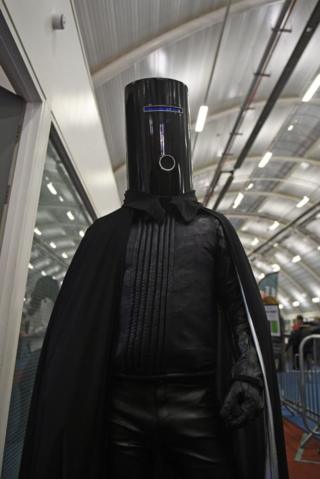 Getty Images
This man (we're presuming it's a man) wanted to be an MP
12:25pm - Have you noticed any strange candidates?

You may have seen Elmo from Sesame Street and a man with a bucket on his head standing behind Boris Johnson on TV today.

Believe it or not, they were hoping to get elected. We explain more here. 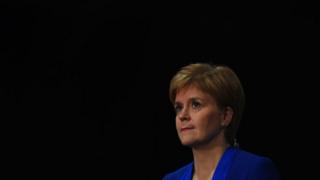 We're into the afternoon after the night before, and Nicola Sturgeon is speaking. Her party the SNP gained 13 more MPs in Scotland last night.

The SNP don't want Brexit to happen and want another vote on whether Scotland should remain part of the UK.

"It is now clear beyond any doubt that the overwhelming majority of people in Scotland want to remain in the European Union.

"Westminster has ignored people in Scotland for three years." 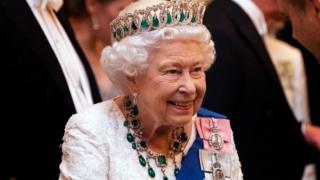 Each prime minister has to visit the Queen or King after winning an election.

They go through a process called 'kissing of hands', but the kissing doesn't happen anymore.

During the meeting the Queen formally invites the prime minister to form a new government.

The role of the Queen is to help, advise and to warn the prime minister. A role Queen Elizabeth II takes very seriously.

Royal experts say that the Queen will remind Mr Johnson that it's important to unite the country after Brexit. 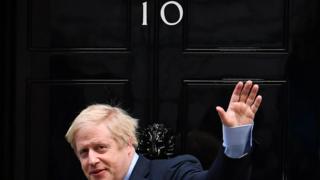 Boris has walked back inside 10 Downing Street receiving a huge cheer from those inside as he walked through the door.

Having spoken to the Queen and having had the invitation to form a new Conservative government, the Prime Minister Boris Johnson has left Buckingham Palace.

His exit was possibly delayed by the changing of the guard ceremony!

11:28am - While we're waiting can we solve the big question of the morning? 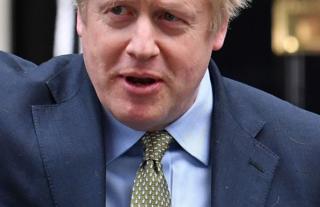 Getty Images
11:18am - Boris still with the Queen.

Even if their chat was short, Boris Johnson has to wait for the changing of the guard ceremony to end before he can leave.

With the meeting lasting over 20 minutes so far, maybe the Queen has put the kettle on.

At the palace, Boris Johnson will see the Queen and will be formally invited to form her next government.

The meeting is held in the Queen's audience room.

The meeting could last a few minutes or go on for ages. It depends on whether the pair have a lot to talk about! 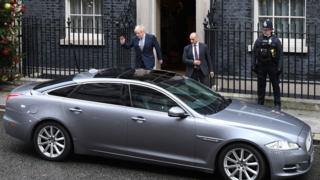 Getty Images
10:57am - Boris is meeting the Queen.

Boris has just arrived and has driven through the gates at Buckingham Palace to speak with the Queen.

The meeting is completely private and no one will know what is said between the two.

At eleven o'clock Buckingham Palace has the changing of the guard but with the prime minister visiting at the same time, it's a double treat for the tourists outside.

He gave a brief wave before getting into a silver car to travel across London to Buckingham Palace. 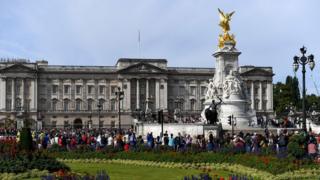 Shortly, Boris Johnson will travel by car from 10 Downing Street to Buckingham Palace where he will meet the Queen.

Mr Johnson will tell the Queen that he wants to form a Conservative government.

Crowds are gathering outside the palace to see if they can glimpse the prime minister.

If you've missed any of our coverage so far, we were live from London this morning for a Newsround election special.

Before Boris visits the Queen, tries to get Brexit done, or anything else on what will be a busy day - He said he needs to 'get breakfast done'.

We've followed the prime minister's advice in the Newsround office, with a round of sausage rolls.

If you have a question you want to get answered by our experts - you can ask them here.

So the Conservative Party has won the general election with a majority.

Newsround's Hayley spoke to Maddie Thimont-Jack who is an expert in politics, to try help us make sense of what happened.

09:20am - What makes the perfect prime minister?

Boris Johnson will carry on as UK prime minister.

It's one of the most important jobs in the UK.

We asked children in Northern Ireland, Scotland and Wales what qualities they thought the prime minister should have. 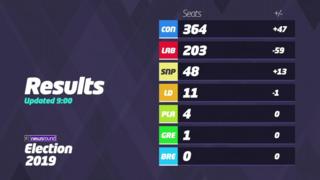 08:55am - You've been telling us what you would do if you were prime minister.

Kids can't vote, but everyone has ideas about how to make the country better.

Boris Johnson talked to supporters in his first speech after winning the election.

Later today Boris Johnson will go to Buckingham Palace to visit the Queen. While there Mr Johnson will tell her that he wants to form a Conservative government.

Joey D'urso and Marianna Spring from BBC Trending talk us through the story of the night. They've been awake for a very long time. 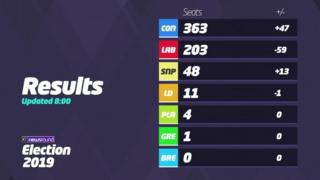 With more seats for the SNP in Scotland, their leader Nicola Sturgeon says that the country wants another chance to decide on whether Scotland should be independent from the rest of the UK.

The last Scottish Independence referendum was in 2014 when voters decided to stay in the UK. 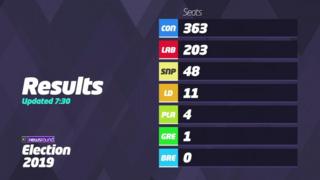 Boris Johnson says the country will now be able to "get Brexit done," to cheers from his supporters. Now the Conservatives have a majority, it is likely that Mr Johnson's deal will get through Parliament and the UK will leave the EU at the end of next month. 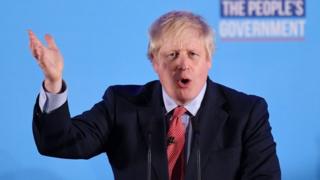 Boris Johnson is speaking. He looks very happy to have the biggest Conservative majority for over 30 years.

The Democratic Unionist Party (DUP) lost two MPs including Nigel Dodds who was is in charge of DUP MPs in the House of Commons.

The Unionist party wanted Brexit to happen, but was unhappy with Boris Johnson's deal and what that would mean for the border between Northern Ireland and the Republic of Ireland.

Sinn Féin took Nigel Dodd's seat in Parliament, but their new MP John Finucane (and all their other MPs) won't turn up to the UK Parliament. That's because Sinn Féin believes the interests of Irish people can only be served by having power in Ireland and not in London or England.

Elsewhere the SDLP party won Foyle, while the Alliance Party, got their first seat since 2010, in North Down. 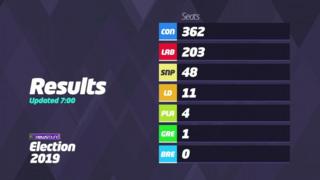 US President Donald Trump has been on social media overnight and has sent his congratulations to Boris Johnson.

Donald Trump/Twitter
06:20am - A really bad night for Labour.

The Labour Party has now lost more than 50 MP seats - many of them in places that would normally vote for Labour. 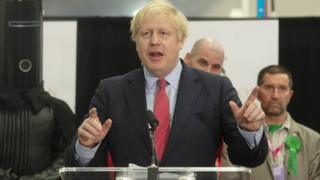 Getty Images
06:10am - What does having a majority mean now?

Having a majority means the Conservative Party has more seats than any of the other parties put together.

Each seat is for a different part of the UK and they are represented by an MP that has been elected overnight.

Now that the Conservatives have the most MPs they can now pass laws and win votes on decisions in Parliament.

The Conservatives say they want to 'get Brexit done' and it means that the UK will probably leave the EU with Boris Johnson's Brexit deal next month.

A lot of Labour MPs have lost their seats and Jeremy Corbyn says he will step down as leader after taking time to think about his party's defeat.

In Scotland, the SNP have done well, winning more than three quarters of the seats in the country. It means that we could see another vote on Scottish independence.

05:50am - Boris says this is the chance for his government to 'change the country for the better'.

He also thanked adults who voted for coming out in bad weather.

It was the first December election in nearly 100 years.

'Looks like a big win for Boris' says Trump. He's not wrong, the Conservative Party is predicted to win the most seats, and get the most MPs in the House of Commons.

05:30am - The Conservative Party win the general election with a majority.

Good morning, it's been a busy night as votes have been counted across the country and the result of the general election is that the Conservative party, with Boris Johnson as leader, has won.

The Conservatives now have won over 326 seats, which means they have a majority in the House of Commons.

They now have more MPs in parliament than any of the other parties combined.

They can now win the votes they need to allow them to make their plans happen.

Here's what else has happened overnight: