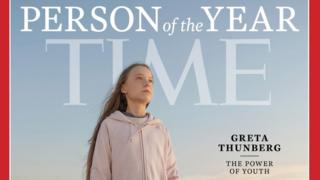 Greta Thunberg has had a pretty awesome 2019.

She may only be 16 years old, but she's already inspired a global movement campaigning for more to be done to tackle climate change.

This year alone she's sailed across the Atlantic Ocean, been nominated for a Nobel Peace Prize, spoken at the COP25 conference and led a climate rally. And that's not even everything she's done!

She's now been named Person of the Year by a prestigious US magazine called Time.

Shortly before it was announced, she told a United Nations (UN) climate change summit in Madrid that the next decade would define the planet's future.

What is Time magazine?

It's an honour to be named Person of the Year by Time and it's a tradition that started all the way back in 1927.

Every year, the magazine names the people or person it thinks has been the most influential in the previous 12 months.

The magazine also often puts together a list of the most influential people on the planet.

Why is Greta the 'Person of the Year'?

Last August, when she was 15, the teenager started an environmental protest outside the Swedish parliament building.

Her strike has inspired students from around the world, leading tens of thousands from Germany, Japan, the UK, Australia and many more to join her #FridaysforFuture demonstrations.

She continued to gain international attention after speaking at the UN Climate Talks in Poland last December. 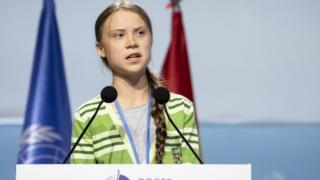 This week she has been speaking at the COP25 Climate Conference in Madrid.

She told world leaders they were putting off making real changes saying: "The real danger is when politicians and CEOs are making it look like real action is happening when, in fact, almost nothing is being done apart from clever accounting and creative PR."

Recently she also turned down an award and £40,000 because she wanted world leaders to take action rather than give out prizes.