Climate change: What did Greta Thunberg say at COP25?

"Without pressure from the people, our leaders can get away with not doing anything!"

That was one of the key messages from Greta Thunberg during her speech at the COP25 summit in Madrid on Wednesday.

COP25 stands for The 25th Conference of the Parties, run by the United Nations (UN). It's a massive climate change conference which has been happening in Madrid, Spain, over the last two weeks.

What's happened so far at COP25?

Why the UN has been thanking young people for speaking out

The 16-year-old climate change campaigner has long called on politicians to act with more urgency when it comes to fighting climate change.

But in Wednesday's talk, she also focused on the science and the "misleading" behaviour of politicians and big business. 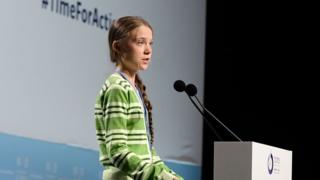 She said countries which had committed to reducing their emissions to zero by a certain date appeared impressive at first glance. This includes the UK, who have pledged to meet this by 2050.

But "this is not leading, this is misleading" she said, warning that the targets did not include air travel and shipping, or the emissions created by goods made in other countries and imported.

That wasn't all she had to say during her speech...

She announced she was changing her public speaking strategy

"I have given many speeches and learnt that when you talk in public you should start with something personal or emotional to get everyone's attention. Say things like, 'Our house is on fire', 'I want you to panic', or 'How dare you!'

"But today I will not do that because then those phrases are all that people focus on. They don't remember the facts, the very reason why I say those things in the first place." 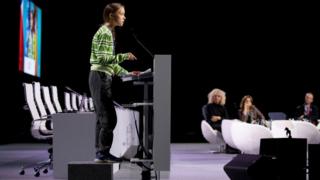 She called on the public to put pressure on politicians

"Our leaders are not behaving as if we are in an emergency. In an emergency you change your behaviour. If there is a child standing in the middle of the road and cars are coming at full speed you don't look away because it feels uncomfortable. You immediately run out and rescue that child.

"Without that sense of urgency how can we, the people, understand that we are facing a real crisis. If the people are not fully aware of what is going on then they will not put pressure on the people in power to act.

"Without pressure from the people, our leaders can basically get away with not doing anything."

Here's what happened when Greta met the US president

Why it's been a big year for Greta Thunberg

Greta and seven more amazing climate activists from around the world 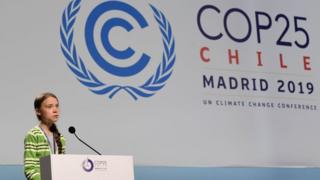 She ended by looking to the future

"In just three weeks we will enter a new decade, a decade that will define our future. Right now we are desperate for any sign of hope.

"There is hope - I've seen it - but it does not come from the governments or corporations, it comes from the people.

"The people who have been unaware are now starting to wake up, and once we become aware we change. We can change and people are ready for change.

"And that is the hope, because we have democracy."

Climate change: What's Greta been saying at the COP25 conference in Madrid?