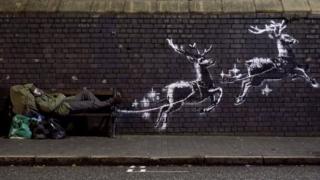 The anonymous graffiti artist Banksy has revealed a new mural in Birmingham.

The mural is of two reindeers that appear to be pulling a bench looking kind of like Santa's sleigh.

The mural was done to highlight the issue of homelessness and the charity of others.

Banksy posted a video on Instagram on Monday with the caption: "God bless Birmingham." 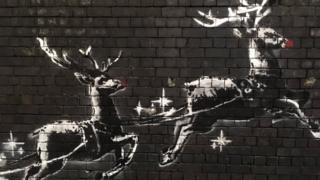 On Monday evening someone sprayed a red nose on the reindeer

The video shows a homeless man called Ryan having a drink before lying down on the bench with all his belongings as the camera pans out to reveal the reindeers.

The message continued: "In the 20 minutes we filmed Ryan on this bench passers-by gave him a hot drink, two chocolate bars and a lighter - without him ever asking for anything."

Hours later, someone sprayed red noses on the reindeer. 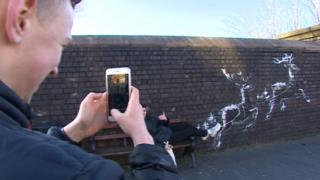 But that's not stopped people from taking pictures of themselves on the bench.

Luke Crane from the area's Business Improvement District said it was now a priority to protect the artwork: "We are very keen to make sure it is a part of our community and not something that is taken away".

Banksy mural and five other difficult things to move